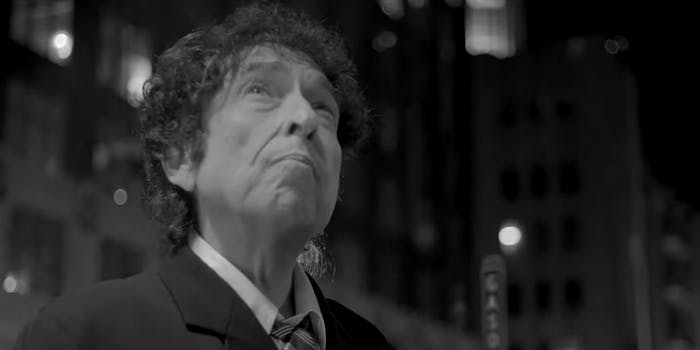 The man still has it.

At age 73, Bob Dylan still has the power to surprise and delight.

In addition to being featured on the cover of the most recent AARP magazine, Dylan continues to move in new directions—or, add some polish to ones from bygone years. Saying the legendary singer-songwriter is always reinventing himself is damning with faint praise; we’re talking about one of the most powerful musical icons of the ‘60s whose songs defined a generation ill at ease, and dissatisfied with politics, power, and (most notably) war. Hey millennials—does that sound familiar?

For his most recent album, Shadows In the Night, Dylan selected 10 Frank Sinatra classics which he covered in his own inimitable style. Dylan may not sound like the young ballader who sang “Blowin’ in the Wind,” but his most recent vocals are rich with emotion and poignant in their phrasing and meaning. Yes, Bob Dylan still has it.

As part of his never-ending interaction with fans, Dylan has released a music video, “The Night We Called It a Day,” produced by Australian director Nash Edgerton based on Sinatra’s 1957 recording. An homage to the vintage Raymond Chandlerish film noir genre, the three-minute black and white microdrama depicts a love triangle gone wrong with a stoic Dylan, a speakeasy owner (Robert Davi), and a sultry blonde love interest (Tracy Phillips). In the spirit of the such period classics, pretty much everyone dies in the end.

Whether intentional or not, the film is a stark contrast to the 2003 film, The Night We Called It a Day which tells the story of a Sinatra tour of Australia in which he got into a squabble with a local reporter that almost shut down his shows.

While often depicted as a recluse, Dylan has acted in a vast number of films and TV projects, even lending his voice to an episode of The Simpsons. Fans and critics agree that Dylan’s brief performance as a roustabout in the 1973 western, Pat Garrett and Billy the Kid, was his finest. And, by the way, the film ends with one of Dylan’s greatest songs—”Knockin’ on Heavens Door.”