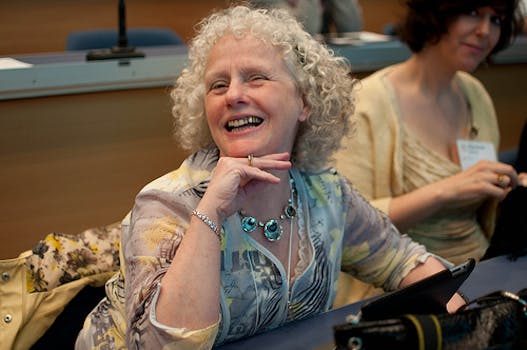 Cathy Browne uses photography to see the world in a new way.

Watching photographer Cathy Browne at work you wouldn’t notice anything particularly unusual; she focuses carefully and snaps with the deliberation of any dedicated shutterbug.

It’s only when she puts the camera down and nearly presses her iPad to her Coke-bottle glasses to check Twitter that something seems unusual.

Browne is legally blind, and photography gives her a new vision of the world.

“I don’t see details past a few inches or so, but when I view my photos on my computer screen, I am transported to another level of beauty,” she recently said on her blog, “I can’t tell you how incredible it is to see what so many people take for granted.”

What sets Browne apart is “her sense of curiosity,” said professional photographer Jeremy Lim in an email. “She uses the medium to see the world in a way she can’t. Most photographers get tired of shooting their native environment, but with Cathy, everything is new all the time.”

She’s not the only one doing this, either. In fact, the Blind Photographer’s Flickr group has over 300 members.

What is it about photography for the visually impaired?

“The camera is an extension of my eyesight, and with digital it’s in real time,” said fellow member Michael, aka ‘picked up a camera and saw‘, in a Flickr Message. “From a practical standpoint I’ve used my camera to read an old medicine bottle that I couldn’t figure out for the life of me, and have on occasion used my camera to see signs.”

Essentially, the camera gives people who are visually impaired new, and better, eyes.

Browne, 57, has less than 10% of her vision in one eye and none at all in the other, the result of neonatal oxygen toxicity. She began focusing on her photography this year, entering the field after a long string of personal challenges.

She had been working in public relations, specializing in startups and technology in Silicon Valley. Two years ago, she and her husband Dave Kane moved to Vancouver to start a new and more laid-back life in semi-retirement.

Neither of them knew how difficult the journey would be.

Kane had been plagued with ill health for decades. Within just a year of transplanting their lives, he died of congestive heart failure. Browne had to restart her PR career—alone—in a strange city.

Just six months after her husband’s death, Browne was working in the Vancouver Library on a project for Tourism Vancouver, helping disabled people access public resources in the city. As she sat at a desk, nose to her computer screen as always, a thief made off with her purse.

When the local paper wrote about the incident, the headline shook her up even more than the robbery.

“’Blind widow robbed at Vancouver Library,’ was not how I wanted to make my mark,” she said.

Being labelled a victim in the press spurred her into action. Within weeks she restarted her long-dormant blog and began showing her stuff on photo-sharing site Flickr.

She reached out to her existing and robust social media networks—particularly to her influential Twitter following and did find support from all over, including from other blind and partially-sighted people.

They helped motivate her. “I have many heroes,” she wrote on her blog. Among them, she said is Tara Miller, who is “an inspiration for me because she shares my passion for photography, and has made a living doing what she loves in spite of being legally blind like me.

Since re-starting her blog she’s been an enthusiastic participant in Photo Friday, an initiative in which each Friday bloggers post and elaborate on photos that mean something in particular to them. “Photo Friday is a life-changer for me,” she said via Twitter.

Her career got a kickstart with a photoset featuring the October opening of a glossy lounge in the Shangri-La hotel in Vancouver.

“The Xi Shi set was the breakthrough,” Brown said in an interview.

The bar management liked her shot of an orchid and a menu so much they’re using a similar shot in their own press materials, which Browne finds flattering. She’s now hoping to compete professionally as an event and food and beverage photographer in a city where it seems everyone has a $1600 camera and a food blog.

But she has an edge over many of her competitors: social media.

“Social media got me involved with SXSW in 2010, and this year, magically, with BlogWorld,” Browne said. “Almost every job possibility has come from Twitter—not Facebook, not LinkedIn. One tweeted recommendation from Hummingbird604 resulted in a paid gig.”

After wrestling with “Should I play the Blind Widow Card?” guilt, Browne sent in an unbeatable entry.

The previous year, just as she was leaving for that year’s BlogWorld Expo, her husband Dave collapsed at home, she wrote in her entry. It was the beginning of what would turn out to be five long months of hospitalization before he finally died in March.

She explained on her blog:

I wrote it all out, then deleted it, then wrote it again. And hesitated again. Was I being too selfish? Too impulsive? Did it really matter?

So many of the people who commented had such great reasons for wanting to go to BlogWorld. They had plans, objectives. I just wanted to make my dream happen. So I sat and agonized for a while longer.

Then I said, ‘What the hell’ and hit Send. And forgot about it.

Her entry sold Dave Cynkin, founder of BlogWorld Expo. At BlogWorld, Browne found a community that already knew and supported her through social media.

It didn’t hurt that she looks exactly like her Twitter avatar and has 6200 Followers. She was able to add more photographs to her growing social media event portfolio (MeshWest, Social Media Week, TEDxUBC…).

These days Browne hopes to specialize in candid event photography, and has developed a popular sideline in macro photography, which she says allows her to see things she could never see with her eyes alone. She now has over 3,000 pictures on Flickr and a growing fanbase.

Photography has helped Browne connect her with a whole new social media community through Flickr groups, Twitter (Blind Photographers are also on Twitter and Facebook) and other platforms. She’s also gained the respect of professionals, surprising and delighting her.

“It’s focused me to look at my world in a different way—to actually translate how I see the world to the world,” Browne said in an interview. She also wants to “inspire others” to show that “anything is possible Who would have (thought) that a blind widow could find such an outlet – and through it, actually find herself?”