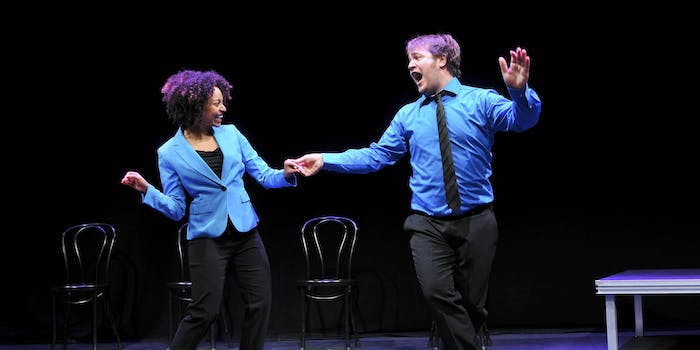 Want a unique theater experience? There's an app for that.

When the curtain goes up on Blank!: The Musical at New World Stages tonight, host TJ Mannix will take the stage and give the audience unusual directions: “Please, do not put away your phones!” In fact, the house lights will stay up, and the audience will keep their screens aglow for a full 15 minutes while they title, script, and score a fully improvised musical. This activity is the very crux of the performance that follows. Without it, the show cannot go on.

Blank! makes a lofty promise: Each night, audiences will see something wholly original, unplanned, that matches the completeness of a traditional Broadway musical.  In order to meet this goal, the show employs live smartphone technology.

If this all sounds out of the ordinary to you, it is. While improv may be booming, and more and more venues and shows are encouraging audiences to use technology to share and promote their experience through social media, Blank! is the only show of its kind to create an immediate shared experience. All this is achieved through a highly localized LiveCube app. Audience members access a local Wi-Fi connection, then log on to the app through a simple Web address. Monitors flank the stage, displaying the results of audience input in real-time.

The show seems to bank its allure on the excitement and thrill of seeing a one-of-a-kind musical, one that has never been seen—and will never be seen again. But what’s most unexpected about this theatrical experience, however, is the intensely personal feel of the use of technology. Far from a gimmick, the opening of the show seamlessly connects audience and performers in a truly unique co-creative experience.

Performer Tessa Hersh, who received improv training at the Upright Citizens Brigade Theater, describes the process as highly interactive: “It’s really a dialogue.” While the audience taps away at their screens, offering suggestions and voting for their favorite ideas, the performers look on and react to each development. “We get to see what people are responding to and what they want to see more of.”

Michael Girts, the show’s creator and a Second City alum, is delighted to see the audience and performers connecting. “People are hooked on their cellphones, which can be a very isolating thing… And then theater is the ultimate example of people in a room experiencing something together. So there’s something very exciting to me about flipping the equation and using your phone, live, on the spot, to connect you with everyone there.”

The technology Girts and his team have employed is highly accessible but never flashy. The really magical moments, the flashes that dazzle the room, come from the connection between the audience and the stage. One of the highlights of the first 15 minutes is a game called Blank Rank, where audience members are assigned a performer and must tap the performers face to win a race. The winning performer must then be responsible for a piece of audience-scripted dialogue. The game is simple enough—and the prize, according to Hersh, “means nothing,” except “that you have more work to do in the show”—but it creates remarkable momentum. “We’re looking at the board; we’re looking at the audience. I look into people’s eyes, and they’re pointing to their phones to show me that they have me. It’s an extraordinarily exciting and interactive moment where we get to connect,” says Hersh.

So could this be a sign of future changes in how we experience live theater?

Girts says he doesn’t know yet. At its inception two and a half years ago, the idea was simply to create a fully improvised piece of musical theater. The app was thus a means to an end, a way to prove to a larger audience that what they were seeing was truly unscripted, as well as to “democratize” the process so that audience members less prone to blurt out suggestions could participate, too. But there were certainly concerns that technology could hinder the audience’s sense of connection. “I think it’s counterintuitive… but thank goodness… it’s actually making the process more intimate. That’s what’s excited me. To whatever extent we can continue to break down that wall… that’s what has my gears turning about what’s next. How can we make the audience even more involved and more invested?”

Blank! runs through Sunday, Dec. 14. For a complete list of showtimes and ticket availability, see the box office.

Photo via Blank! The Musical