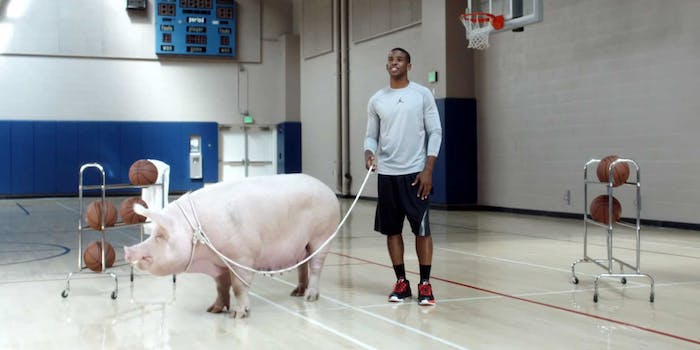 L.A. Clippers players Blake Griffin and Chris Paul have their own comedy special

If they don't make it in the NBA, there's always Hollywood.

Chris Paul and Blake Griffin are no strangers to sketch comedy. Paul’s State Farm commercials have been well received, as have Griffin’s Kia ads. Blake’s sketch at the ESPY Awards was the highlight of the show. Now, the two Los Angeles Clippers superstars are teaming up for BGCP3TV In HD, a two-part sketch comedy campaign that originally aired on Adult Swim.

Jordan Brand enlisted Neal Brennan, the co-creator of The Chappelle Show, to co-create and co-write the show.

Skeptics may question whether Paul and Griffin have the acting chops to consistently pull off Chappelle’s kind of comedy, but Brennan had nothing but praise for the two. “There are a lot of funny athletes out there, but it’s rare that you see a guy like Blake—I can honestly say he’s an actor who just happens to be an amazing basketball player,” said Brennan. “But don’t sleep on CP, either. Watching him, you see right away that he’s got plenty of talent and the situational awareness needed to pull off the jokes.”

The on-the-court chemistry between the two future basketball Hall of Famers is undeniable. Thanks in no small part to them, the Clippers are currently running Los Angeles. This special could be the start of Blake and CP3’s takeover of the rest of Hollywood.