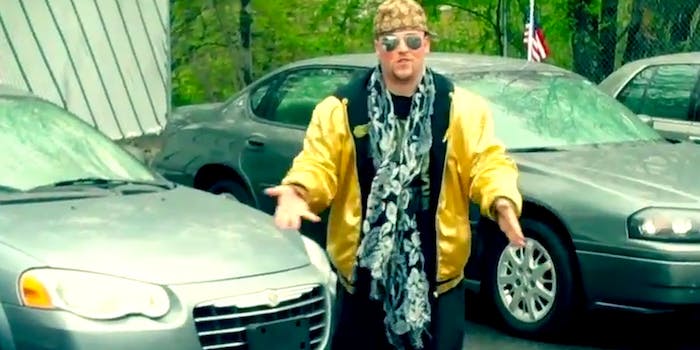 Not even a recent resurgence to Internet fame can help get Blake Boston to trade in his 1994 Acura sedan.

The second installment of Boston’s Scumbag Thursdays series—a weekly rap series on YouTube the 22-year-old launched last week—takes viewers straight out to the used car dealership for “My Whip,” a track about a car so sexy “it turns the lesbians straight.”

Strapped with an old-school beat and a pointed hook from longtime friend and hype man Naked Dave, Boston (known synonymously as Scumbag Steve) pays proper respects for the whip that gets him around his native Beantown, which gloriously makes its way into the video via a shoddy poster hanging in his bedroom.

“It ties in with Scumbag Steve,” Boston told the Daily Dot. ‘My whip’s gonna steal your girl because my whip’s better than yours, and it turns lesbians straight because it’s so sexy.

Other highlights from the 2:54 video, whose view count is currently frozen at 303 (a sign that YouTube is having trouble keeping up with the influx of traffic) include: Boston and Naked Dave cruising through the McDonalds’ drive through lane; Boston running through the woods with a furry dog; and Boston lounging in his coup with a very shaggy dog.

It’s a real hoot, but is it enough to help Boston get one of those Benzes off the lot? Boston doesn’t seem to mind either way.

“Not every person is going to like both the video and the song, but as long as I get ten people to like the song, at least I reached somebody,” he said. “That’s the whole point of making music.