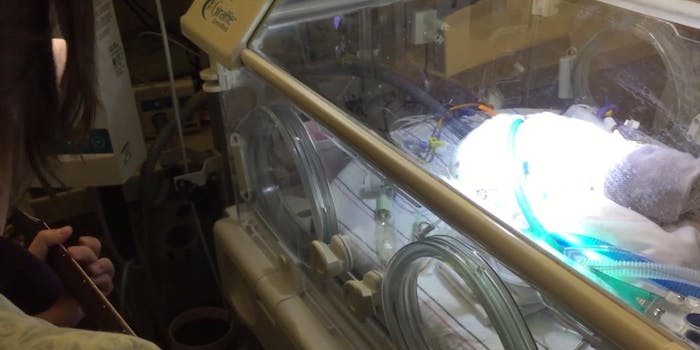 When Chris Picco lost his wife during the premature birth of their son earlier in November, he turned to the only person he had left to remember her through—the couple’s newborn baby, Lennon.

According to the memorial page set up by Picco, his wife Ashley died from complications on Nov. 8 during Lennon’s birth, who was due next February. However in a double tragedy, young Lennon was only around for three days, dying on Nov. 11.

The day before the young boy passed away, Picco sang an emotional rendition of the Beatles standard “Blackbird” to Lennon while he lay in an incubator in a California hospital. According to his father, the newborn died from complications as a result of being born so early.

Since the deaths of both, the family set up a memorial fund to pay for the medical expenses of the ordeal with a target of $50,000. In a matter of hours, the page lists the total funding at more than $56,000.

Correction 12:52pm CT, Nov. 13: This story’s headline has been corrected to clarify the age of young Lennon, who was born prematurely at 24 weeks but only survived outside his mother’s womb for three days.