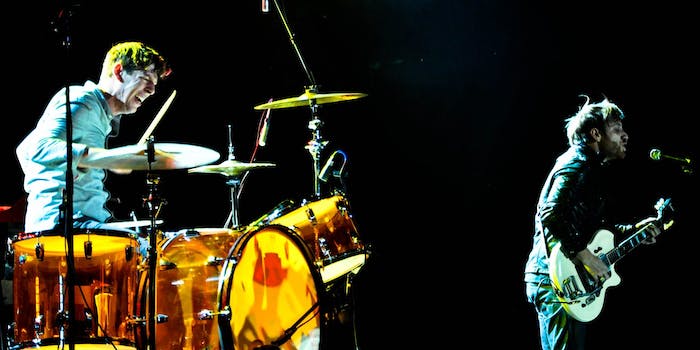 We have to give them credit for the comparatively lavish approach to drumming up hype.

When it comes to announcing tour dates, most bands pay this task no matter and defer to a strategically emailed press release. But the Black Keys took to YouTube this morning to launch their summer tour, and we have to give the Akron, Ohio rock duo extra credit for the comparatively lavish approach to drumming up hype.

“Many of you have cheered for me or worked with me or supported me,” Auerbach says, “And now everyone of you has good reason to be critical of me.”

Auerbach is buried in boos. Drummer Patrick Carney follows suit, is likewise met with jeers before he can get a word in. Then it cuts to SMPTE color bars, and the meat and potatoes of the info scrolls: “The Black Keys Turn Blue World Tour. Tickets are for sale May 16, 2014.”

The band’s new album Turn Blue is out May 13. You can stream it via the iTunes store. The lead single, “Fever,” is unfortunately an SMPTE color bar—a boring, placeholder ditty overrun with instrumentation that doesn’t go anywhere.

A legitimate bummer, because in terms of major brand rock stars, the Black Keys are the most harmless, pleasant, and fun outfit of blues burglars working today. They inspire college bros to dig beyond Zeppelin, and their best stuff is gold. Let’s hope Blue harbors an optimal Keys summer jam.