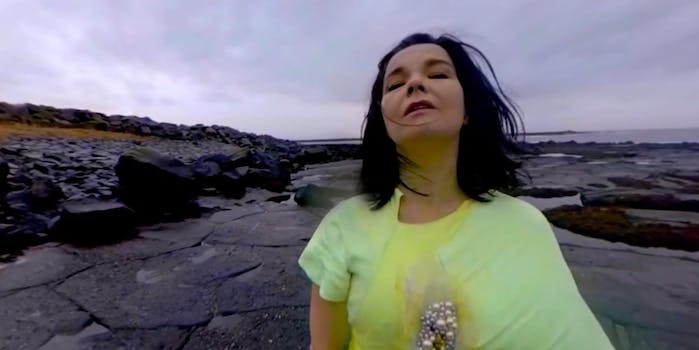 Join Björk on a beach in this virtual-reality music video

Last week, Björk released the video for “Stonemilker,” a song off her latest album, Vulnicura. It’s her first video shot specifically for virtual reality headsets, and the camera follows Björk around an Icelandic beach, encircling the singer as she walks alone. Toward the end, Björk multiplies and fills the screen with a plaintive melody.

Vulnicura is an album about loss, solitude, about finding inner strength after the dissolution of a partnership. In a March 21 Facebook post, Björk explained how the video for “Stonemilker” came to be:

“this came about as a spontaneous fruit of mine and andrew huang´s collaboration. we had already done black lake, the “family” moving album cover and the black lake “book cover” trailer and then found us in iceland one day with nothing to do and a 360 camera lying about. we discussed its potential for intimacy and andrew then suggested we take it to the beach where the song was written. it immediately rang true for me as that location has a beautiful 360 panoramic view which matches the cyclical fugue like movement in the song. if the song has a shape it is sort of like a circle that just goes on forever.”

The video experience is much different when you watch it on YouTube, without a VR headset. Director Andrew Huang says the video was of course meant to be watched through virtual-reality headsets, which was one of the components of Björk’s three-month MoMA retrospective, which just came to an end. Fans were also able to take part in the immersive experience at Rough Trade locations in New York and London, and Huang said the setup provided a “multiple-Björk fugue situation where you’ve got multiple Björks singing to you.”

Last November, Huang, who’s been collaborating with Björk since 2012, met up with her in Iceland to film the “Stonemilker” video, after filming the video for “Black Lake” last August in a huge production, with a 50-person crew. “It was like, ‘Hey, we’re going to make this epic, nocturnal, heartbreak opera out in the landscape,’” he said. “We had all kinds of technology we wanted to bring to it, and there was months and months of planning. It was just really weighty.

“And then, when we came back in November… We were there shooting this moving album cover, and my producer at Vrse.works brought out one of the first iterations of their proprietary 360 camera, just so we can have it. We’d also brought a few other 360 cameras with us just to kind of be ready for anything, because, having worked with Björk for a year and a half, you just have to be ready.”

They were supposed to film a video for “Lionsong,” but Huang relates that Björk was having trouble getting comfortable with some of the technology they were using. When they returned to Iceland in November, Huang says there was a different aesthetic in the air.

“She had basically covered her entire house in lilac,” he explained. “She painted all of her walls lilac and had these lilac candles, and she was also wearing all these neon yellow garments. And it was very clear that she was kind of in a different… I came back from ‘Black Lake’ expecting to pick up where we left off and elaborate on that. However, I think she had already moved on emotionally, and I think she was in a more positive and healing kind of place.”

The “Lionsong” shoot was eventually put on hold as the more circular nature of “Stonemilker” came into focus. The beach where she wrote the song was not far from her house, Huang says, and so they set out to shoot there instead.

“When you have a 360 camera, you see everything,” he said. “So you can’t hide your crew behind the camera because there is no behind the camera. So as Björk performed for us, we’re actually all hiding, and we all had no idea what we were capturing. And it really was just trusting Björk and this camera to be by themselves, and it really was like a duet between her and this technology. And she loved it because there was nothing restricting her and it was completely intimate.”

The virtual-reality music video is becoming more popular: Taylor Swift explored 360-degree views with an interactive app for the “Blank Space” video, and Paul McCartney recently offered fans a virtual reality app for live performances. Björk has long embraced technology in her videos, album releases, and live performances, while managing to keep themes of nature intact. In a recent interview with Pitchfork, she described making 2011’s album Biophilia and being nervous to approach the intimacy of Vulnicura:

With Biophilia, I was being like Kofi Annan—I had to be the pacifist to try to unite the impossible. Maybe that was a strange, personal job between me and myself, to show how overreaching I was being as a woman. The only way I could express that was by comparing it to the universe. If you can make nature and technology friends, then you can make everyone friends; you can make everyone intact. That’s what women do a lot—they’re the glue between a lot of things.

Could there be a time when whole albums are released in VR? Huang sees the potential for VR in the tandem with music, but says the medium is “not to be taken lightly.”

“I think there are a lot of people who want to do VR as an experiment or they have small budgets and are making just kind of bonus material. But virtual reality is kind of a greedy and demanding format in that if you’re able to look around, people not only want to look around but also step forward and into the space. They want to be able to touch things, they want to be able to see them in stereo. Once you start opening up different senses, then you kind of want more. Therefore, providing more… you literally are providing eight times the information that a normal film screen would.”

For Björk, however, it was an experiment, and a spontaneous one at that. “The nature of this whole album is very naked, very stripped down,” Huang said. “She doesn’t have all the accoutrements from Biophilia. We just wanted to make a naked statement and a naked performance, and an intimate one.”