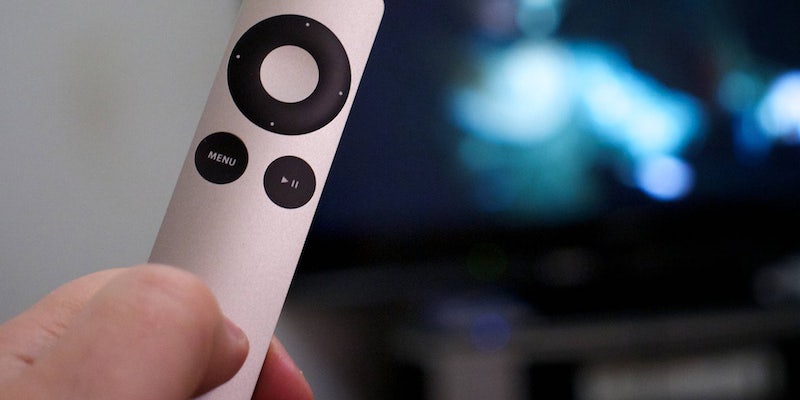 BitTorrent Live to debut on Apple TV with 13 free channels

The live event is a streaming problem BitTorrent is hoping to solve.

Cord-cutting services like Netflix may satisfy modern entertainment standards, but sports fans and politics wonks continue clinging to their cable subscriptions. The notion of livestreaming a must-win game—when you’re at the mercy of buffering feeds—is too stressful to seriously consider.

The live event is a streaming problem BitTorrent is hoping to solve with BitTorrent Live, a multi-channel app it debuted Tuesday at the Internet and Television Expo in Boston.

“We’ve got a system that has much lower latency than traditional livestreaming platforms where you’re 30 seconds or 45 seconds behind and that’s really frustrating when you’re consuming sports,” BitTorrent VP of Media Erik Schwartz told the Daily Dot. “Especially when you’re consuming it and you’re sitting there with Twitter open. It kind of removes all the drama, and the whole point of watching the soccer game is the drama. This solves that problem.”

Schwartz said that BitTorrent Live—expected to debut on Apple TV this week—offers technology that is comparable to direct broadcast, satellite, or cable. In other words, you won’t be more than 10 seconds behind. (BitTorrent Live will hit mobile devices and desktop within “the next few months.”)

“This is a new protocol from the ground up designed to do livestreaming on the Internet, but it really is inspired by a lot of the peer-to-peer work that Bram Cohen did creating the original,” Schwartz said. “You have a livestream that is fundamentally powered by the audience. We only stream for like the first 10 viewers. After the first 10 viewers, everyone else is streaming from another viewer.”

BitTorrent likewise has sights set on the YouTube generation of second-wave millennials, too: “There are a lot of MCNs and other folks that we’re talking to,” Schwartz said.

As the San Francisco-headquartered company noted via press release, pay-per-view events will be part of the business plan. The first wave of free original programming will contain a tier of free channels, all broadcasting live events. Those include:

AWE: Formerly known as WealthTV, AWE is a 24/7 network devoted to taking viewers on a journey of how wealth is achieved, used and enjoyed.

Clubbing TV:  The official media partner of some of the planet’s biggest electro festivals, Clubbing TV offers exclusive, quality electronic music content from artists and labels all around the globe embracing the entire the Dance Music lifestyle.

FAST&FUN is a new Television Channel offering an action-packed, adrenaline-including medley of extreme sports, from car racing and motocross to snowboarding and skateboarding; a large variety of disciplines, shows and competitions from all over the world.

Fightbox: From MMA and boxing to arm wrestling and sumo, Fightbox is a compilation of the finest combat sports from around the globe all on one channel.

NUsicTV:  Delivers the finest new independent artists at the forefront of music in a linear broadcast, allowing viewers to discover the vanguard in music without having to search the internet.

One World Sports: It features exclusive, live, world-class sporting events and premier matchups from around the world, with over 3,000 hours of unduplicated sports programming annually. Content focus is on live and same-day action of league, championship and qualification competitions in soccer, basketball, baseball, golf, table tennis, badminton, darts, and more.

TWiT: The TWiT.tv Netcast Network with Leo Laporte features the #1 ranked technology podcast This Week in Tech, along with over 20 other top-ranked online shows.

“It’s not going back to the old days of digging up streams wherever you could,” Schwartz added.