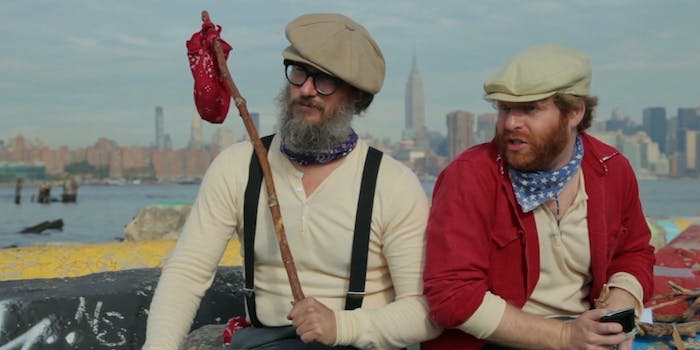 How the Bindle Bros. enraged the Internet

'What's more ridiculous than a company that is selling bindles that's going to change the world?'

Last weekend, you might have read a New York Times–style story about the Bindle Bros., two Williamsburg pioneers with a vision to simplify how we carry the weight of our everyday lives: bindles.

As the story hit during Fashion Week, many weren’t sure what to make of it. Did they need a bindle? Was this the end of Williamsburg? The Business Company profile of Josiah and Dusty Bindle, the CEO and CFO of Bindle Bros., only intensified the confusion.

Creator Kemp Baldwin explains that his city of residence was his canvas, really.

“I live in Williamsburg, and I saw something at a show that I thought was like the next evolution of hipster, uh, craziness?” Baldwin said. “I made a joke to a friend about artisanal bindle bags, and that sort of spawned this. Also, I’ve been kind of into watching all these reverent business profile documentaries about companies that are just born, just sort of new into the world, and they’re going to change the world. That sort of entitlement all these videos have.

“And I thought, ‘What’s more ridiculous than a company that is selling bindles that’s going to change the world?’”

Comedians Ben Kronberg and Matt Klinman were enlisted to play Josiah and Dusty Bindle, respectively, and they got especially into their mission statement. Klinman mentions that another local business inspired them in their quest for super-expensive DIY authenticity, as well as a little bit of tech startup ego.

“Everybody in our generation thinks what they’re doing is very important because they’re doing it,” Klinman said. “Because we’re all our own protagonists in our story.”

Some people saw through the video’s satire of Brooklyn, marketing, and faux earnestness. Others got really, really mad, especially on Twitter. As much as we need stories about people who make us feel better about ourselves, the balance is we need things to blindly hate. A simple video about an overpriced bindle startup got people talking about the insidious nature of “homespun” commerce, the death of the dream, etc.

That tension has even shifted to the Bindle Bros. When asked about sales on the street, the three begin to argue. Have there been bindle sales behind Baldwin’s back? Is this a bindle swindle?

But then, the larger truth.

“It’s a culture we’re all part of and a victim of,” Klinman said. “I think it’s this idea that your idea is the next big idea. … You see these things and you’re like, ‘That’s ridiculous,’ but then there’s like this pang of like, ‘I kind of want that?’”

And some of those angry people became fans, once they actually read the story.

“Those are the highest compliments,” Baldwin said. “When someone’s gone from about to start calling for a boycott on the Times and the Bindle Bros., to being a fan.”