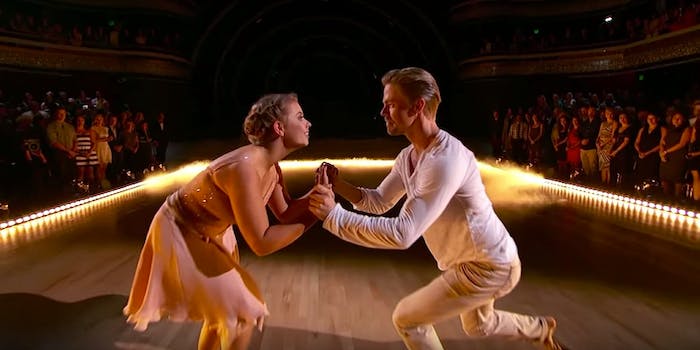 Bindi Irwin performs an emotional ‘Dancing With the Stars’ tribute

There wasn't a dry eye in the audience.

Bindi Irwin paid tribute to her late father in a breathtaking and emotional performance on Dancing With the Stars.

The theme of the night was “most memorable year,” and for the 17-year-old that was 2006, the year that Steve Irwin died. It’s been nine years since then, and in a pre-taped segment, she explains that she’s ready to tell her story. The two were inseparable, and his death still affects her even now.

“It took a really long time to understand what actually happened,” Irwin said, noting that her father’s spirit still lives on today. “For the rest of my life, I’ll kind of feel like he’s going to come home.”

When she and Derek Hough took to the dance floor, she poured all of her emotions into the performance, a contemporary dance to the tune of “I’ll Be Watching You.”

By the end of it, there was hardly a dry eye in the audience, and the judges were visibly moved.

I love you. Thank you for always being with me, wherever I go.

Screengrab via Dancing with the Stars/YouTube