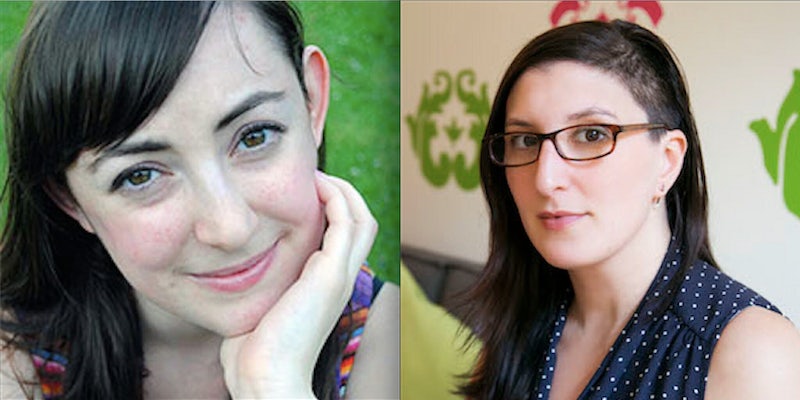 'If we feel like voices aren’t being featured or highlighted, we’re going to do it ourselves.'

These are questions you won’t hear discussed when you listen to The BinderCast, a new podcast for women and gender non-conforming writers. Its primary focus is, refreshingly, the craft and business of writing.

Hosted by Lux Alptraum and Leigh Stein—the organizers behind BinderCon, a conference and community for women and gender non‑conforming writers—the podcast brings the resources of a vast community right to your fingertips. Or rather, your ears.

“Oftentimes when we talk about women’s writing, women’s voices, and the female experience it gets flattened into this kind of stereotype,” Alptraum told the Daily Dot. With that in mind, the hosts consciously selected writers from diverse fields and backgrounds for their first season. From TV writer Aparna Nancherla to poet Morgan Parker to memoirist Jillian Lauren, no two guests bring quite the same perspective to the table.

And yet, the podcast feels remarkably accessible. In episode 1, for example, Roxane Gay advises writers about whether it’s ever OK to write for free. “Don’t write for ugly websites,” she says. “That just doesn’t make sense.”

Alptraum and Stein set a tone that’s practical but thoughtful, never hesitating to pleasantly disagree. “Leigh and I work well together because we’re very different,” said Alptraum. “It’s interesting to see [which guests] we have a rapport with.”

Many of their guests speak with a disarming mix of humility and confidence. They are eager to share their experiences and knowledge, but never speak condescendingly or adopt didactic tones. “I haven’t always had control over the experiences I’ve had in my life, but I have control over how I tell the story of them,” says guest Jillian Lauren in episode 2.

Alptraum and Stein are hopeful that the podcast can extend the work they’ve done at BinderCon and bring resources to a larger writing community. Now women who live in cities far from the usual BinderCon locations of Los Angeles and New York can experience the depth of a panel conversation in a more intimate and immediate way.

The primary aim of the podcast, as Alptraum sees it, is to continue building community and spaces for underrepresented voices. Rather than dwelling on issues of inequity, Alptraum and Stein are working to build a framework for something better.

“I don’t like to sit around and complain,” she explained. “I’d rather take action and I’d rather take positive action. If we feel like voices aren’t being featured or highlighted, we’re going to do it ourselves.”

The BinderCast is available on iTunes and Soundcloud. New episodes are released on Tuesdays.