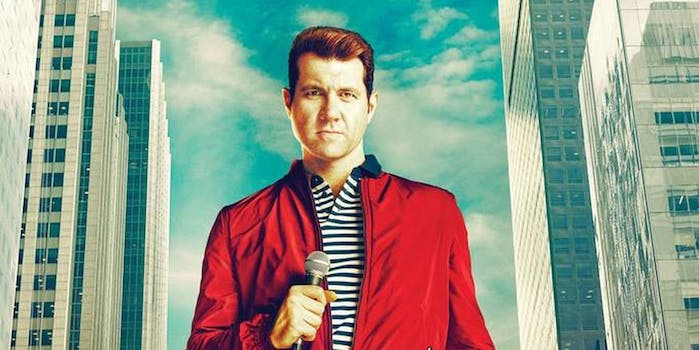 'I usually ignore but this one is SHAMELESS and PATHETIC.'

If there’s one thing fans of Billy Eichner’s characters on Difficult People and Parks and Recreation have learned about him, it’s that Eichner has no problem calling bullshit and telling it like it is.

On Friday the Billy on the Street personality dragged his latest set of victims on Twitter, accusing Capital One and Ross Mathews (aka Ross the Intern) for stealing his intellectual property in a video advertisement featuring the television personality.

Eichner, who is known for his erratic man-on-the-street interviews on his Funny or Die television show, began his complaint by quoting a tweet by Capital One with an attached video.

It’s time for street trivia! Hint: @helloross has some trick questions up his sleeve.https://t.co/SMJDruUako

The video, which appears to be part of an advertising campaign promoting Capital One’s Venture and Quicksilver credit cards, shows Mathews testing a pair of English blokes on credit card-related trivia.

“Yet another Billy on the Street ripoff,” Eichner wrote when quoting the tweet. “I usually ignore but this one is SHAMELESS and PATHETIC. (And not funny).”

From comparing Capital One’s video to just a few of Eichner’s Billy on the Street sketches, it’s understandable why Eichner is pissed. The video appears to imitate Eichner’s witty commentary and fast-paced interview questions in a game-show format, with Mathews shooting off inquiries about credit card rewards and playfully insulting the contestants when they answer incorrectly.

Take a look at this similar campaign video featuring Mathews for reference:

Mathews replied quickly to the accusations on Twitter, stating that his time in the entertainment industry was built on these man-on-the-street interviews.

Are you serious? I've been doing man on the street interviews since 2001. I've never even seen your stuff. Bless your heart.

And Mathews does have a point. From his intern fame at The Tonight Show with Jay Leno to his numerous television hosting gigs, Mathews’ interviews during his 15 years in the industry—compared to Eichner’s 11 (according to a mention of him in the New York Times)—consist of smart jokes and commentary not much different from Eichner’s shtick.

Not to be out-burned, Eichner replied telling Mathews that Capital One reached out to his people about the campaign,.

.@helloross Perhaps u didn't but ur new friends @CapitalOne certainly did as they reached out to my agents about this campaign. HAPPY PRIDE.

I'm so confused. Why didn't they just ask you? Seeing someone who isn't you do this makes me uneasy.

Because I don't work cheap. https://t.co/l84gwaFele

As the pair continued to sling tweets back and forth, even Watch What Happens: Live host Andy Cohen commented on Eichner’s accusation with a pitiful, “Oh honey no.”

Thanks for passing on it. We had a great time together. Happy pride & good luck with everything in the future!

.@billyeichner accuses me of stealing man on the street segments from him, but I started doing it on TV 15 years ago. Do the math. 😘

Life is short and I will not be getting into a Twitter feud with ROSS THE INTERN of all people. Here's a fun video: https://t.co/QU7bEKSjhs

Just googled @billyeichner to watch some of his stuff for the first time. He's funny! Wish he was nice, too.

While it appeared the drama dust was settling on Eichner’s side, Mathews returned hours later, rebutting Eichner’s final comment with a backhanded compliment/negging/self-deprecating combo. Yeah, we’re not quite sure either.

No feud. Just responding to you. I came before you. I agree you're funnier, but you're also a dick. ❤️, Mr. Mathews https://t.co/5UGykcsEqt

.@billyeichner Glad your hissy fit is over. We should be building each other up, not tearing one another down. All good. ❤️🌈

If this Twitter “not a feud” feud is indicative of anything, it’s that Mathews and Eichner are more similar in comedic stylings and slinging insults than they are different.

Capital One’s advertising media contact did not respond to the Daily Dot for comment on Eichner’s accusations.