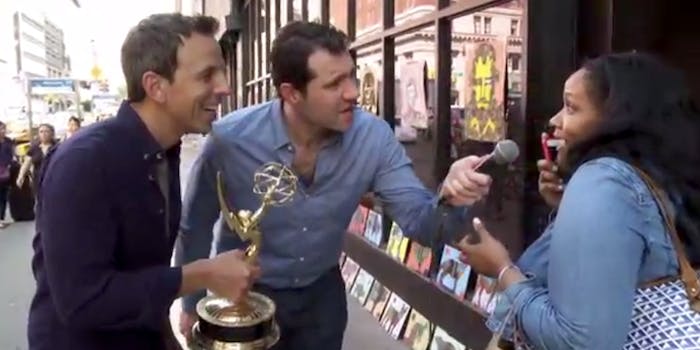 Give him all the Emmys for this one.

Billy Eichner‘s aggressive man-on-the-street-style reporting and boisterous outbursts of pop culture profanity are part of what makes the modern age of television so glorious. So naturally, it wouldn’t be a proper celebration of the medium without some unique coverage from the man himself.

Eichner took to the streets of New York City with the evening’s host Seth Meyers to play a special Emmys edition of one of his signature games, “For a Dollar.” Eichner solicited advice for the host, covered opinions on the nominees, but most importantly did some very important charity fundraising for the cast of The Big Bang Theory.

Twitter quickly came to a consesus that Eichner’s antics were far more entertaining than Seth Meyers’s, with some even lobbying for him to liven up the ceremony by taking over hosting duties.

Is there a way for @billyeichner yelling at people to just be the entire rest of the night?

Why is the Emmys not just @billyeichner doing that for three hours?

Why isn’t this guy hosting instead of Myers

Could we see Eichner on stage next year as master of ceremonies yelling at Maggie Smith as she accepts her award? One can only hope.