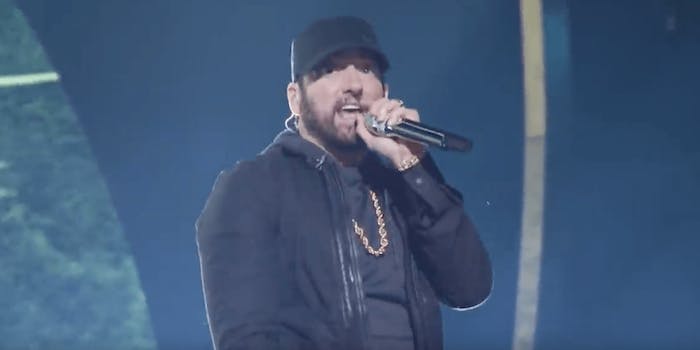 Billy Eichner didn’t like that ‘Lose Yourself’ performance. Eminem stans are still attacking him

Billy Eichner was not at all pleased with Eminem’s Academy Awards performance, calling out the “Lose Yourself” rapper for prior use of homophobic lyrics. The comedian, of Academy Award nominee The Lion King fame, tweeted about it Sunday night.

“Well, you can still sing the word ‘f—t’ a million times and still perform at the Oscars that’s about ‘diversity.’ Mmkay,” Eichner tweeted during the ceremony.

As of Wednesday afternoon, Eminem stans are still criticizing Eichner in his mentions.

“[N]o one cares because unlike you, they can differentiate instead of getting TRIGGERED at the mention of a single word. Get over yourself,” @tacojoe93 added on Wednesday.

Eminem fans are a passionate base and many have spent years defending the rapper’s lyrics, including his habit of using gay slurs, because they say it’s just art, slang, and not meant literally. They’re targeting Eichner, a gay comedian, with just the sort of normalized bullying that Eminem critics say his lyrics facilitates. It essentially validates Eichner’s initial critique.

During the 2020 Academy Awards on Sunday night, Eminem—at long last—performed the track at the Dolby Theater in Los Angeles. The song from 8 Mile won the Oscar for best song in 2003. After a montage of former best song winners, many iconic anthems representative of various eras, the Detroit artist suddenly rose with a full band.

The performance initially garnered mixed reactions from the A-list crowd. However, by the end of the track, Eminem had earned a standing ovation.

Eichner’s argument also fits into the Oscars’ longstanding diversity problem. The Academy has taken flack for not being diverse enough across various portions of the awards, from performances to nominee selections.

No stranger to controversy over his output, Eminem attracted a backlash from the Gay and Lesbian Alliance Against Defamation (GLAAD) ahead of the 2001 Grammy Awards for allegedly promoting violence against the gay community via his lyrics.

More recently, when Eminem dropped Kamikaze in 2018, he used the album to lob bombs onto other artists, including Tyler the Creator—which were also characterized as homophobic.

Eminem later apologized for the line. He has not addressed Eichner’s tweet.