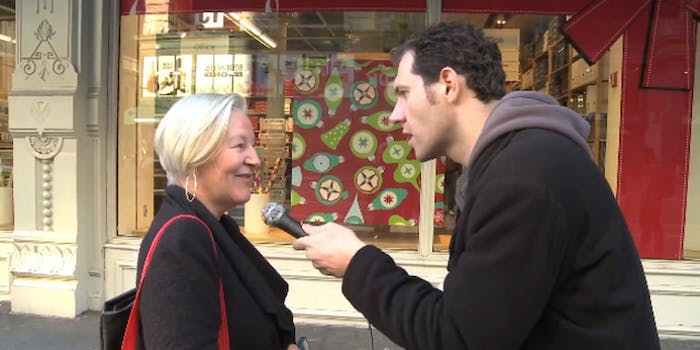 Who knows how long this war will rage on.

Billy Eichner is used to yelling at people on the street as part of his TV show, Billy on the Street. Now Burger King is on the receiving end of his rage.

The fast food chain recently debuted a new commercial for its chicken nuggets, in which a host asks two people on the street about the new nugget-shaped product. The host looks a bit like Eichner, but he doesn’t quite have the personal space-invading invective Eichner has perfected.

Still, it didn’t sit well with Eichner. Over the weekend, he waged a war of words against Burger King for this infraction.

Hey @BurgerKing-thanks for stealing my act for ur new commercial!! Except its not as funny & everyone knows u stole it. GET YOUR OWN IDEAS.

One thing Burger King is learning at least is that you do NOT fuck with Billy on the Street fans. OUR VOICES WILL BE HEARD!!!

With shots fired, his friends quickly had his back, and many chose #TeamBilly.

Yo @BurgerKing, stop stealing from the hilarious @billyeichner and stick to what you’re good at: giving me diarrhea.

.@BurgerKing @billyeichner brothers have taken opposing sides. families are torn. burger king, you must concede. end the tragedy you caused.

Hey @burgerking, you were stupid if you think hiring some random actor to rip off @billyeichner was going to work. I WAS AVAILABLE!!!

@billyeichner Can’t wait to see you! Oh, and bring Elena!

Who knows how long this war will rage on, but it’s certainly more entertaining than Burger King’s commercial. Burger King has yet to respond to the allegations, but they’ve continued tweeting like nothing happened.