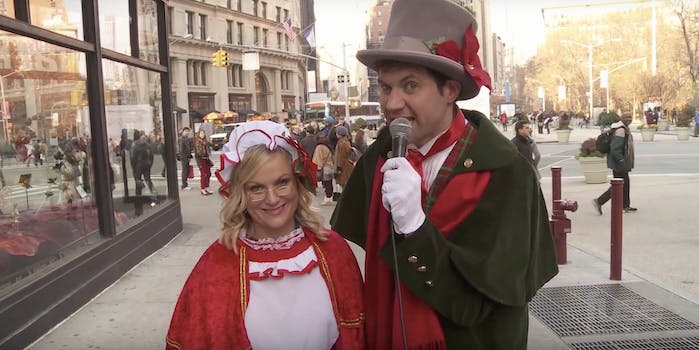 Screengrab via Billy on the Street/YouTube

If there's more to Christmas than these two, we don't want to know.

In this festive favorite from 2013, Eichner and Poehler run through the streets of NYC offering to pay innocent bystanders to sing carols along with them. On the spot and probably terrified of the Billy on the Street host’s aggressive approach, most fail spectacularly. One man doesn’t even recognize Poehler in her (fabulous) Mrs. Claus costume.

The duo collaborated for several years on Parks and Recreation, and Eichner has enjoyed recurring roles in Bob’s Burgers and Difficult People. But it’s Poehler’s role in Disney’s Inside Out that we should’ve seen coming after this: After all, thanks to this clip, she’s been bringing Joy to our world for three years running.