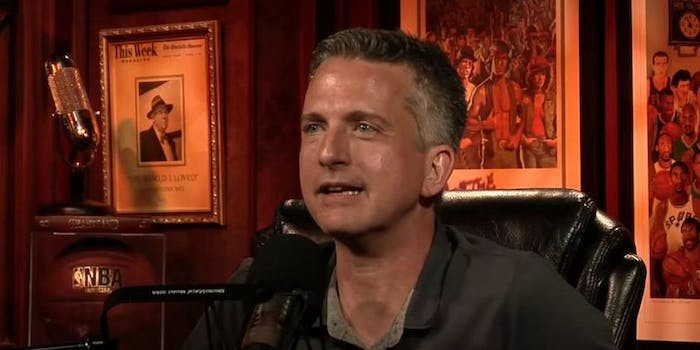 The Sports Guy is moving to premium cable.

Bill Simmons, who became one of this country’s most powerful sports writers and Web presences at ESPN.com and Grantland, has left behind the digital world—at least temporarily—and HBO announced Wednesday that he’s now headed to premium cable to host his own talk show.

In HBO’s press release, the pay TV company said it had signed Simmons to a “major new multi-year, multi-platform exclusive agreement” in which he’ll star in a new weekly series that will “feature stories and guests from across the sports and cultural landscape” and that will be shown on the TV service along with its digital platforms.

Simmons will appear exclusively on HBO, but he’s also agreed to a production deal to produce video podcasts and other features. He’ll also consult with HBO Sports on the development of new shows and documentary films, but it doesn’t appear as if HBO will give him the same kind of Web platform that he had at Grantland.

“We have been fans of Bill Simmons and his work for a very long time” said Michael Lombardo, the president of HBO programming. “His intelligence, talent, and insights are without precedent in the areas he covers. We could not be more thrilled for him to bring those talents to HBO and to become a signature voice at the network, spanning the sports and pop culture landscapes.”

Simmons became the Pied Paper of a new generation of fan boys across the world when he rose from the ranks of his own BostonSportsGuy.com website and caught on—and caught fire—at ESPN.com in 2001. He went on to create a well-regarded sports/pop culture vertical at Grantland, and that, combined with his co-creation of the ESPN 30 for 30 sports documentary series, made him one of the most powerful sports media figures in the nation.

But he was suspended multiple times at ESPN—his latest was for calling NFL commissioner Roger Goodell a liar on Simmon’s podcast—before the network decided in May not to re-sign him to a new contract, throwing Grantland into disarray and leaving the website’s future in doubt.

And he’s not been ESPN’s only big loss. Along with Simmons—who was thought to be earning $5 million a year while with the network—Keith Olbermann and talk-radio host Colin Cowherd also won’t be back on the network or its website.

But that’s no longer Simmons’ concern.

“It’s no secret that HBO is the single best place for creative people in the entire media landscape,” Simmons said in the press release. “From the moment I started talking to Michael and Richard (Plepler), it was hard to imagine being anywhere else.”

HBO, though, might not be Simmons’ lone employer for long.

TV/@hbo decision re @BillSimmons world came 1st but there will be another announcement in future as to where he will call home for digital.