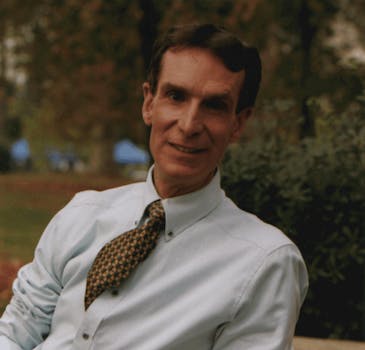 Other popular AMAs this week include a casino dealer and an exiled gay Boy Scout leader.

Reddit’s probably never going to find a scientist they love more than Neil deGrasse Tyson, but Bill Nye, the Science Guy of the former TV show, is still in the upper ranks. The most popular interviewee this week, Nye didn’t delve too deeply into thought experiments, but talk about the ugliness of the TV business, mentioning that “according to the accountant at the legal entity involved, we still haven’t shown a profit. I am of course open-minded, but skeptical,” he wrote.

Two very, very different people who had lived under autocratic regimes gave their take. The first is Adnan Hajizada, a former political prisoner in Azerbaijan who spent almost a year and a half in horrible conditions for a video that satirized government corruption. “In Azerbaijan the real heroes are dead,” he glumly noted.

On the other hand, another redditor’s adorable 95-year-old Italian grandmother had almost nothing negative to say about her time under Mussolini. “He was real person. Very passionate. Make anyone excited about Italy future,” she said of the former dictator, though she admitted “he did bad thing after join hitler and Stalin.”

Rounding out the top seven: an experienced casino dealer, a man who developed a web application that gives anyone the chance at encrypted chat, Judas Priest’s bassist, and Tim Griffin, who made the media rounds this past week after saying he was fired by the Boy Scouts for being gay.

A note on terminology: AMA stands for “ask me anything,” while “IAmA” is simply “I am a”; AMAA means “ask me almost anything.”

Do you and Neil deGrasse Tyson hang out regularly? If so, what do you talk about? (moomooguy2)

Astrophysics, the business of television, baseball, wine, and women.

2) I spent 17 months in a 3rd world country (horrible conditions) jail because of a YouTube video I made. AMA.

Did you play games in your mind to stay entertained? What is it like in solitary confinement? (maeon3)

Sometimes, you go crazy by realizing that you haven’t heard a sound since morning. So you start singing to yourself just to fill the void.

If your website could change one thing about how the world works, what do you hope it is and why? (tgjj123)

I hope that one day it’ll be secure enough to allow even people in dangerous situations to communicate safely. We’re not there yet because we need more research, but I want to provide an easy to use venue for secure communication for absolutely everyone.

4) IAmA casino table games and poker dealer, with extensive knowledge of useless casino numbers and trivia that only Reddit would find interesting. AMA.

Have you ever seen some one win a genuinly life changing (for them) amount of money when they clearly needed it, as in turned their last $100 into $10k because they were about to lose their house? (death_by_exile)

I have seen it. As much as I genuinely love seeing people win (outside of the selfish reason of getting more tips from winners), I don’t like seeing people win life-changing amounts of money. Here’s why. Huge wins set mental precedents for gamblers. They see the game as something that at one point saved their asses and made them a ton of money.

What was going through your head when you watched Mussolini speak? (fickett)

I love Mussolini. He did so much for the young people. He used to allow kids to do sports, get education, his only problem is going along with hitler.

Is it weird listening to your own music? (bathsalts2)

7) IAmA camp counselor who got fired at Boy Scout camp for being gay and ten of my fellow staff members walked out with me. AMA

Have they tried to get in touch with you to try and say sorry and take you back? (turnawayjimmy)

Not at all. I was kicked out abruptly. I feel by doing news reports etc that I have really drawn a line in the sand and will not be welcome back until the council repeals it’s anti-gay policy, which is what we are working towards. Every staff member at the camp Winton still supports me, but the Golden Empire Council and upper scouting executives do not