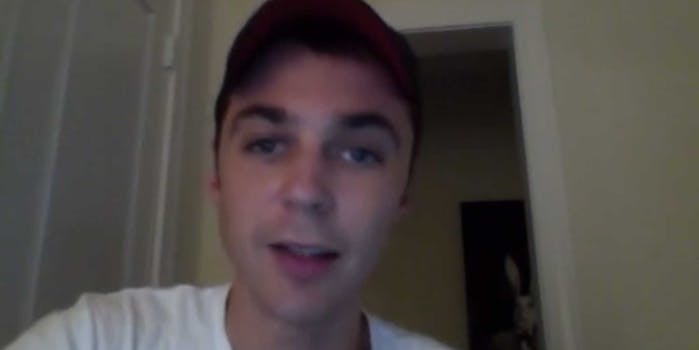 The Houston Rockets called upon their biggest celebrity fan to woo the biggest NBA superstar on the market right now.

It’s been called “The Indecision.” Soon, potentially, NBA superstar Dwight Howard will announce which team he’ll be suiting up for next season.

Houston Rockets have stepped into the conversation with the unlikeliest of allies: Sheldon Cooper.

Cooper, the genius theoretical physicist from The Big Bang Theory, doesn’t seem like he’d be a big basketball fan. But Jim Parsons, the Emmy award-winning actor who’s portrayed him on TV for the past six years, certainly is.

The Houston native is a lifelong Rockets fan and would love to see the Los Angeles Lakers center come to Houston. He pleaded his case on YouTube in a personal video, which was uploaded to Rockets General Manager Daryl Morey’s channel.

“I personally believe that the center is the most important position on any basketball team, and I think that’s what usually leads to winning championships,” Parson explained.

If you’re looking for laughs, you might want to stick to watching The Big Bang Theory. Parsons is speaking to Howard as a fan, and he wants them to succeed. What that will take, according to Parsons, is an elite center like Howard.

“I believe if you play for the Rockets, you could play some of the best and most exciting basketball of your entire career, and I think bring home a few rings,” Parsons said.

Howard’s still deciding his best move, but if he joins Houston he’ll already have a fanbase waiting for him.

Update: USA Today reports that Howard will sign with the Rockets.