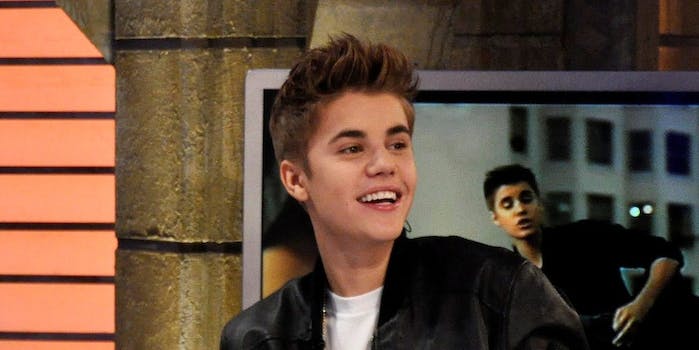 Bieber referred to ex-girlfriend Selena Gomez as “my baby” during a surprise performance in Austin, Texas.

Justin Bieber showed up at Banger’s Sausage House & Beer Garden in Austin, Texas to perform an acoustic set during South by Southwest. While footage taken of the concert shows plenty of fans excited to see him, the bar apparently had to stop serving alcohol to accommodate the young singer, who is not yet 21. Bieber’s performance was kept a secret, and it came at the end of manager/enabler Scooter Braun’s SXSW “Sunday Funday” showcase.

Bieber dedicated this impromptu performance to his ex-girlfriend, IRL Disney princess Selena Gomez, who attended the show. He also kept his sunglasses on the entire time despite the fact that he was performing indoors, in a bar, at night, which is worrying evidence that the diminutive Canadian crooner has received a certificate from the Bono School of Pomp & Douchery.

Bieber’s surprise appearance reconfirmed that the 20-year-old, for all his obnoxious pretentions and bratty antics, does have a solid set of pipes.

What’s left unclear: Is Gomez back with Bieber? Did his borderline-creepy Instagram shout-out actually win her back?

For people in Austin sad about missing the secret concert, first of all, I hope your teen years are going well, and second, there are still tons of great music acts to be heard at SXSW.