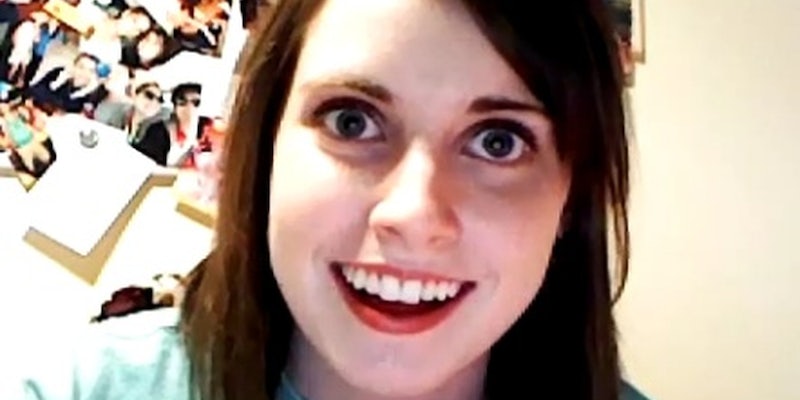 Titled “JB Fanvideo,” wzr0713 follows Beiber’s directions for his new fragrance contest to the T: she makes her own version of “Boyfriend” but with an intentionally creepy twist.

After staring eerily into the camera with her mouth agape for nine seconds, wzr0713 launches into her own rendition of “Girlfriend.” The lyrics are as creepy and clingy as they come:

“I’ll always be checking up on you. Hey boy, who you talking to? If I was your girlfriend, I’d never let you leave—without a small recording device, taped under your sleeve.”

“The modern﻿ Every Breath you take right there!,” STINGNL wrote on YouTube.

Within twelve hours of being linked on Reddit, “JB Fanvideo” hit the front page, meaning it’s only a matter of time before wzr0713’s rhymes spread throughout the Internet.

At some point this morning, the “Overly Attached Girlfriend” meme was born, based on a still from wzr0713’s video entry.

The first image macro created on quickmeme says, “I sewed my name on all your shirts, in case you forgot you’re taken.”

At press time, the image had been viewed more than 300,000 times, and inspired more than 175 other image macros in five hours.