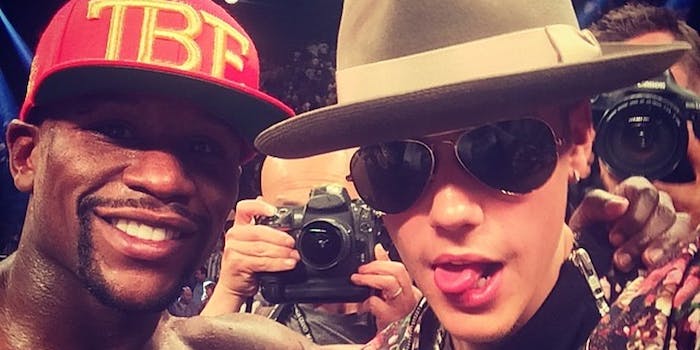 How old was the Bieb when he dropped the 'N' word 5 times as a "joke"? Old enough to know better.

Amid conflicting reports about when exactly damning footage of Justin Bieber making a racist joke first surfaced, the pop star has apologized profusely for the prank, saying he was just “a kid” when it happened.

A day after British newspaper the Sun posted a video of Bieber telling the joke, Bieber has declared in an extensive apology posted to Twitter that he “made a reckless and immature mistake.”

But it may not have been all that immature. If TMZ’s timeline is accurate, they received the footage four years ago, and claimed it was taken when Bieber was 15. Bieber himself claims the footage was taken five years ago, which backs up TMZ’s claim. But a report from the Sun, echoed by People, claims that Bieber actually made the joke just three years ago, when he was 17 and the cameras were rolling for the documentary movie Never Say Never.

In the video, Bieber looks directly at the camera, then sets up an obviously racist joke. Over his friends’ objections (“Don’t say it, don’t say it”) he then goes on to spill the punchline: “Why are black people afraid of chainsaws?” “Run n––, n––, n––, n––, n––.”

“That’s just straight ignorant,” one of his friends replies.

TMZ claimed it waited until now to leak the video both because Bieber was underage at the time and because he had immediately apologized to his friends for the joke. On Twitter, Bieber’s apology seemed heartfelt:

As a kid, I didn’t understand the power of certain words and how they can hurt. I thought it was ok to repeat hurtful words and jokes, but didn’t realize at the time that it wasn’t funny and that in fact my actions were continuing the ignorance. Thanks to friends and family I learned from my mistakes and grew up and apologized for those wrongs. Now that these mistakes from the past have become public I need to apologize again to all those I have offended. I’m very sorry. I take my friendships with people of all cultures very seriously and I apologize for offending or hurting anyone with my childish and inexcusable mistake. I was a kid then and I am a man now who knows my responsibility to the world and not to make that mistake again. Ignorance has no place in our society and I hope the sharing of my faults can prevent others from making the same mistake in the future. I thought long and hard about what i wanted to say but telling the truth it always what’s right. Five years ago I made a reckless and immature mistake and I’m grateful to those close to me who helped me learn those lessons as a young man. Once again…. I’m sorry.

But it’s hard to reconcile his claims of being too young and ignorant to know better with the contrasting reports of his age. 15 is already old enough to understand how powerful a slur Bieber was wielding: at 17, it seems largely inexcusable. Compounded with the Bieb’s well-known relationships with veteran black performers including former mentor Usher, whose influence Bieber recently dismissed, it’s hard to know how making a racist joke on camera could have seemed like a good idea to him at any time post-stardom.

It’s also hard to take Bieber’s assertion that he learned from his mistakes at face value given how many petty crimes the no-longer-teen heartthrob has been racking up lately.

The Sun claimed that Bieber originally tried to buy the footage in order to suppress it from being released. Here’s a thought, Bieb: next time, just save yourself all these years of trouble and don’t be racist to begin with.