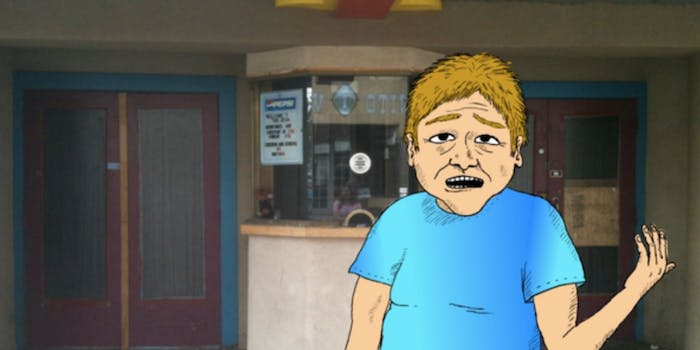 Did you hear the one about the famous comedy writer who fell in love with newspapers as a kid?

Did you hear the one about the famous comedy writer who fell in love with newspapers as a kid?

It goes something like this: Fred Wolf, a noted Hollywood screenwriter and former writer for Saturday Night Live, never strayed far from his roots as a fan of the local newspaper. “As a child, we moved around a lot,” Wolf told the Daily Dot. “The comics in the newspaper were a constant touchstone in my life.” As his career flourished, not only with SNL but also as the scripter of such films as Grown Ups, Joe Dirt, and Strange Wilderness, the idea of being a newspaper comic strip creator was never far from his career sights. That passion, not to mention a collection of friends named Sandler, Spade, Miller, Rock, Nealon, and Carvey, led to the birth of Beyond the Comics, a feature Wolf hopes merges the past and future of newspaper funny pages.

Beyond the Comics is a series of 30- to 60-second animated blackouts featuring some of the funniest names in comedy. There’s Chris Rock as a sardonic barber in “Where’s Ray?“; Dana Carvey, the man of a million voices; Dennis Miller playing himself (a sarcastic, obscure-referencing curmudgeon); and David Spade, the wise-ass malcontent. And that’s just for starters. Here’s Carvey doing his infamous George Bush imitation and another featuring Spade at his sarcastic best.

Beyond the Comics is a personal project for Wolf, and he’s been at it for seven years, funding it out of his own pocket. It’s been somewhat of an arduous process, but he now believes with the backing and distribution support of Digital First Media—with its reach of 64 million homes—his animated baby is now gaining momentum. One ingredient to success is the participation of a large stable of well-known, A-list comedians whose only role is to be funny. Wolf writes the scripts and travels to either Los Angeles or New York to record the narration before passing it on to one of three animators.

“There is no makeup and no 6am wakeup calls,” Wolf said with a laugh, noting how simple he makes it for his buddies to do their part for the animated strips. “I show up with a mic and tape recorder and pre-written jokes. So far, [my comic friends] have been willing to come along for the ride to see if it pans out.”

If Beyond the Comics is to succeed, it will have some challenges to overcome. Wolf agrees there is no simple business model for publishers who feature his online video laugh track. One option would be to follow the lead of long-standing syndicators who bundle a variety of content together for one price.

While Wolf would not go into specifics, he works with newspapers on a revenue-sharing deal in which ads run as a pre-roll before the clips as well as from sponsors who receive display ads alongside the animated feature.

“We are in the process of finding a model that works best,” Wolf added. “We are not really focused on money right now. We want to be seen by as many people as possible.”

From a marketing perspective, it doesn’t hurt to have buddies like Dana Carvey, who gave Wolf’s project a national shout-out on The Tonight Show With Jimmy Fallon. Carvey does everything but tattoo the site’s URL across his forehead.

For newspaper publishers wanting to expand their reach to younger audiences, Beyond the Comics, in its current iteration, may not be the perfect demographic match. To target digitally inclined media consumers, Wolf’s service will need to sport a younger look friendly to YouTube regulars and go beyond its unquestionably hilarious but decidedly un-Comic-Con roster of talented joke tellers. Is the Church Lady as funny to millennials as it was 28 years ago? That said, Wolf is open to expanding Beyond the Comics’ talent pool, recalling how he started his career: randomly submitting comics to newspapers in hope of catching a break.

While not commenting specifically on evolving the print comic strip into a video format, some newspaper pundits believe the evolution of the funny pages could mirror the overall risk/reward transformation facing newspapers in general.

Wolf believes his optimism and clever, quirky gags can be enough to honor his dream of becoming a successful newspaper comic contributor.

Screengrab via Beyond the Comics