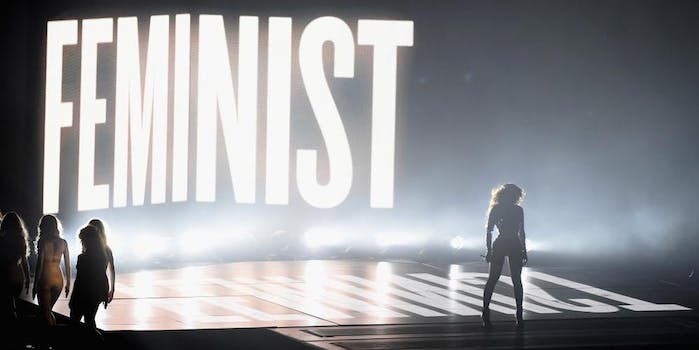 Beyoncé’s ‘feminist’ VMA backdrop has conservatives in a huff

Beyoncé stole the show at last night’s MTV Video Music Awards in more ways than one. While her performance had everybody dancing along—even little Blue Ivy Carter—it was one word that flashed on the screen behind her as she struck a pose that lit up the Internet.

The most provocative picture from this year’s MTV VMAs http://t.co/YEuHUyj45H pic.twitter.com/Hzm07gI69p

With her dramatic, unannounced declaration of support for feminism in front of a live television audience of millions, Queen Bey instantly made herself a target for conservatives on Twitter who were determined to police the meaning of the phrase.

There were the snide remarks:

Photoshopping a giant question mark at the end of this would make this much better. pic.twitter.com/ysVt9AkJWT

Feminist. Heh. I think I follow people who thought that was “cool” that Bey did that? And I am laughing so hard.

99 problems….. RT @Heminator: And with that, I officially declare the word meaningless. pic.twitter.com/VYuvfTxd0w

There were the comparisons to a violent revolution:

There might be some dissidents if feminism rebrands as Beyoncéism, but the Beyoncéists could crush them instantly

And there were the critiques of her outfit and dance moves:

Thanks to @Beyonce I learned tonight that requiring female back-up dancers to dry hump everything in sight is #Feminism. Empowering! #VMA

@derekahunter Nothing says #Feminism more than a half nekkid rich broad incoherently keening about her insatiable desire for dick. @Beyonce

@derekahunter @Beyonce sad that someone so beautiful & talented needs to act like a skank to feel good about them self. KEEP YOUR LEGS SHUT!

One user had the insanely cleverly idea to try to contrast word with deed:

sure. why not? #VMAs pic.twitter.com/JCgQSTAwR4

It led, predictably, to some uncomfortable responses:

@SooperMexican Is this the #VMA interpretive dance version of a #Slutwalk?

Silly me, I thought #Feminism would involve more clothes. RT @SooperMexican: sure. why not? #VMAs pic.twitter.com/g6lcDiV7jR

Conservative Twitter was very concerned about her leg posture.

.@derekahunter @SooperMexican But.. it seems that “pose” is the only one she knows to “strike”… How often you see her legs closed? #Ick

But perhaps no tweet better sums up the right’s concern-trolling over Beyoncé’s support for a concept that they regularly deride than this one:

@Heminator Here. Super fast job. Had to move her over too. pic.twitter.com/NbrsHK4GmL