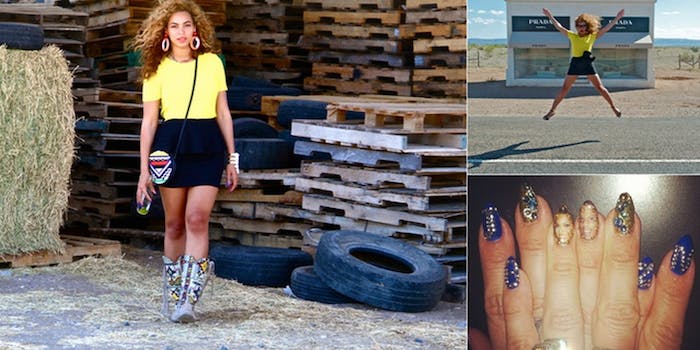 Follow the R&B diva on her trip to Prada and Marfa, Texas.

Few things in life are as entrancing as Beyoncé’s Tumblr. Through it, Beyoncé invites viewers (“beys” in the beywildering language of her cultish manifesto) to accompany their Queen on a yacht-based Odyssey as she attempts to discover What is Art.

The next chapter of the journey has just been posted.

This leg of the tour finds Beyoncé in Texas, her childhood home which she now visits exclusively to achieve Art.

The magical thing about Texas is that everything bright-colored becomes Art against the state’s washed-out sandscape backdrop.

A jalapeño pepper in your hand becomes Art. Your friend pushing a cart next to some of the grocery store’s more expensive soup and salad selections becomes Art. A yellow shirt in front of shipping pallets: many an Art is here.

One place Beyoncé looked for Art was at some Art that already existed: Prada Marfa, a permanent installation designed to look like an abandoned Prada storefront in Valentine, Tex. (about 40 minutes outside of Marfa). Beyoncé jumped in front of it, which was Art in front of Art.

Another place she sought Art was in horror. Here is a terrifying manicure in which the faces of Beyoncé and Jay-Z have been sharpened into a retro talon nail-shape and decorated with small gold balls.

This Art is a reference to the traditional American spiritual He’s Got the Whole World in His Hands. These fingers represent the manicured hands of God; the whole world (Beyoncé and Jay-Z) not in His hands, but on them. With the approval of her thesis advisor, Beyoncé has chosen, for her independent study, to visually “rewrite” a piece of American folklore and that is Art.

Beyonce also wrote editorial notes about Rashida Jones on an old copy of the New York Daily News and mailed it to you because she is your Nana and there was an article about that actress you like in the paper so she tore it out and mailed it to you, it should arrive in about two days’ time, so keep an eye out for it.

Another thing that happened was that everything got old-timey for a little bit, haha, just kidding guys, that’s a lens filter.

There was also a picture of Jay-Z pushing Beyoncé on a swing (the dog represents the viewer; this is what the dog sees) and one of a baby (Beyby Blue?) drinking out of a bottle and wearing a teeny tiny Watch the Throne tour T-shirt .

If you would like to learn more about Art and private planes, please visit Beyoncé’s Tumblr.