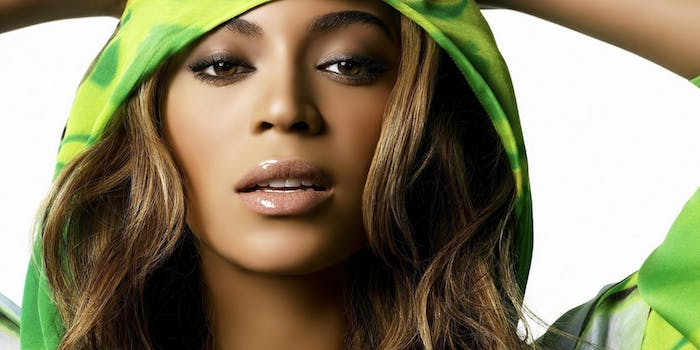 While you were sleeping, Beyoncé dropped a brand-new album on iTunes

So crazy right now. While you were sleeping, Beyoncé crept down your chimney and gave your the best gift of the season you never saw coming—a 14-track, self-titled “visual” album, released exclusively on iTunes.

The 32-year-old singer also released 30-second previews for every video on her YouTube channel.

Everyone, even conservative blog curmudgeon Matt Drudge, is listening to it, blabbing about their favorite tracks—“Blue (feat. Blue Ivy)” is a big one—on Twitter.

Lyric of the #Beyonce album *so far* (courtesy @losh_me): “Can you lick my skittles?”

Beyonce blowin’ away the field. Over the last 12 hours, 827K tweets, while most people were sleeping (per @Topsy) pic.twitter.com/aV83SXAXbX

Weirdly, someone named Boots is all over the album credits. Who is this mysterious collaborator? BuzzFeed’s Myles Tanzer got to the bottom of it.

We’ll update this with a lot more because we have to actually finish listening to it.

It’s a good day for quiet releases. Lorde has a new track called “No Better,” and it looks like Britney Spears is gearing up for something too:

Have a little surprise coming for you all in a bit…any guesses as to what it is?! #BritneySurprise

If you haven’t heard it or if you’re just a hater, stay off social media today because it’s going to be all Beyoncé, all the time. Oh, and if you want the tl;dr version, this is the only comment you need to read.

Update: Beyoncé is now No. 1 on iTunes—without any promotion. It seems the element of surprise, not to mention the fear of missing out on Beyoncé (a.k.a. F.O.M.O.O.B.), got a lot of people to shell out $15.