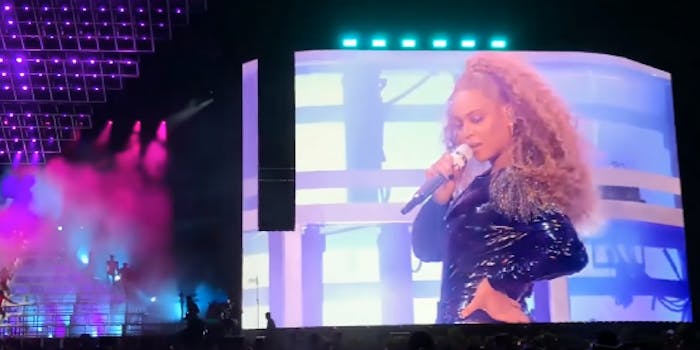 Beyoncé and Solange took an unexpected fall on stage at Coachella

The sisters took a spill, but they clearly laughed it off.

During one of her much-ballyhooed performances at Coachella this year, singer/dancer/performer/virtually everything else Beyoncé suffered a mishap that provides a little reminder of her basic, well, humanness. Namely, she tried to hoist her sister Solange into the air during their performance of “Get Me Bodied,” but they both toppled over in the process.

Fortunately, neither of them seemed even the least bit fazed by the accident, with Solange kicking her legs in the air gleefully after hitting the deck. Beyoncé made sure the crowd showed her younger sister some appropriate love after the mishap.

“Give it up for my sister!” Beyoncé called out to the crowd, which seemed pretty delighted at the unscripted moment. The two sisters clearly had a blast performing alongside one another, regardless of whether they managed to keep their feet on the ground.

This was the second weekend of the epic music festival, and Beyoncé returned to headline once again, following up on her seismic performance last weekend. Many people, in fact, have taken to calling this year’s festival Beychella, in recognition of her looming, all-encompassing dominance over the festival.

In addition to Solange, Beyoncé was also joined by her Destiny’s Child comrades, Kelly Rowland and Michelle Williams, for another performance on the festival’s second weekend. They essentially reprised the medley they performed for the festival’s opening weekend, but that was probably great news for anyone who missed out on the first show. Beyoncé’s husband Jay-Z, an iconic rapper in his own right, also took to the stage on Saturday.

Sunday marks the final day of the annual Coachella festival in 2018, meaning it’ll be a year before the valley is once again chock-full of concert-goers and performers. It’s probably safe to say that for all the Beyoncé fans out there, this year’s festival won’t soon be forgotten.