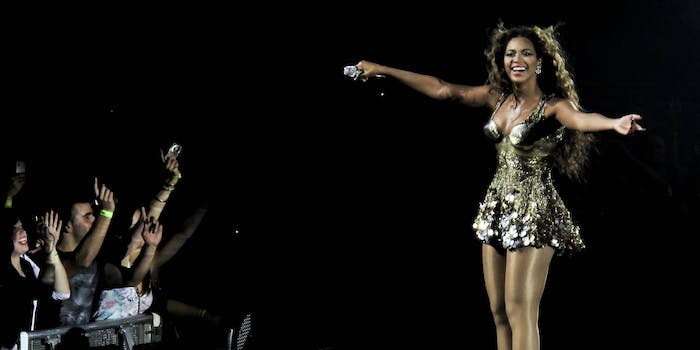 There’s no evidence that Beyoncé has a secret Snapchat account

Is Queen Bey faceswapping on the DL?

The theory that Beyoncé may have a secret Snapchat account is both incredible and (tragically) improbable.

Let’s back up a bit. The Fader reported on Saturday that Beyoncé’s mother Tina Knowles posted a video that had her face swapped in with Beyoncé. In the video, Queen Bey raps “The Message” by Grandmaster Flash.

It’s a disarming but addictive visual that you’ll probably watch a dozen times today before sending the link off to all your friends and family:

The point being, Queen Bey is casual about social media because of the following reasons: 1) She’s busy slaying all day, 2) She’d probably be, like anyone else, bored by constant reminders of how awesome she is, and 3) Who needs 134,329,343 notifications from Facebook, Instagram, Twitter, etc., blowing up your phone every hour?

Being the holder of a secret Snapchat account is the type of non-casual social media behavior that Beyoncé is too cool to comprehend. It’s hard to imagine the term “secret Snapchat” falling from Queen Bey’s lips, unless it’s to say “Why does Drake keep bothering me about following him on his secret Snapchat?”

There are also a myriad of other non-Snapchat apps like MSQRD and Face Swap Live that allow users to faceswap without the aid of Snapchat.

Also, Tina Knowles insists in the faceswap video’s caption that Snapchat had no role in its creation. “No Snapchat!! Seriously !!,” Knowles wrote in the caption.

In conclusion, Beyoncé’s mom has no reason to lie to you.