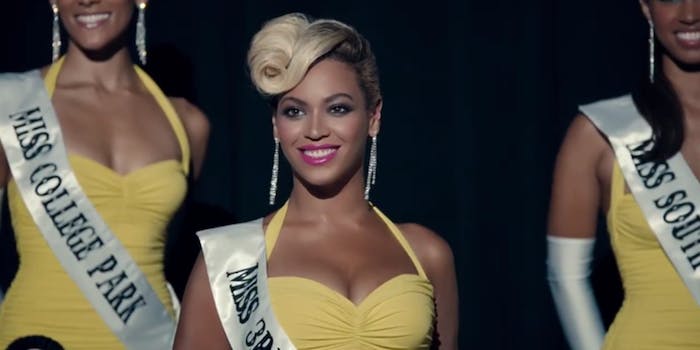 Beyoncé is a grown woman, and she can do whatever she wants, like drop a secret album in the middle of the night.

Last night, around midnight, Beyoncé quietly released a self-titled album to iTunes. There was no marketing push, no promotion, no chance for certain critics to get an exclusive, no advance talk on Twitter or Facebook to dilute the release.

This was something big: The virtual world was listening to it in real time and weighing in. Instead of seeing reviews on music blogs, we saw unfiltered reviews in the middle of the night, on Twitter (some 800,000 of them, as of this morning). There were no music-industry hierarchies to elbow out of the way. There was just us and Bey.

The album is an extremely personal one, so it makes sense she would release it on her terms. From the first track, “Pretty Hurts,” she’s addressing body image and the media pageantry women endure: “Shine the light on whatever’s worst,” she sings. She’s also addressing women of color, a group that’s often dismissed when we discuss eating disorders and body-image issues.

On this album, Bey’s showing us artist, wife, mother. She’s also showing us we can be sex-positive (“Partition,” “Blow”) and, literally, explicit about sexuality and pleasure. On Twitter, several women pointed out another message:

And that extends to “Flawless,” on which she samples the TED Talk of Nigerian writer Chimamanda Ngozi Adichie:

We teach girls to shrink themselves, to make themselves smaller. We tell girls, you can have ambition, but not too much.

A few tracks later, there’s “Blue,” a song about (and featuring) her young daughter Blue Ivy, and an extension of feminist thought and encouragement to the next generation of girls who run the world.

In addition to the tracks, Bey also released music videos to accompany the songs. In a time when artists are struggling to produce one possibly viral video for a song, she went and did 17. (You can find 30-second previews on her YouTube page.)

The videos link together as a feature-length picture of a woman in charge of, and exploring, her image. This is beyond Sasha Fierce. These are all the mirrors of Beyoncé: The video for “Flawless” is a celebration of womanhood, beauty, and her H-Town roots; “Grown Woman” features Bey and her mother sitting like royalty; “Pretty Hurts” offers images of how exactly women’s bodies are co-opted and broken down. I can’t say I’ve seen a video that straightforward, well, ever.

There’s a lot to sift through, but this is a radical album, not just in message but in approach and push. She got us to presumably hand over $16 in the middle of the night, and less than 12 hours later, the album is currently No. 1 on iTunes.

If there’s a new model for releasing albums online, she might have just nailed it to the wall. Beyoncé is a grown woman, and she can do whatever she wants, as she just proved.