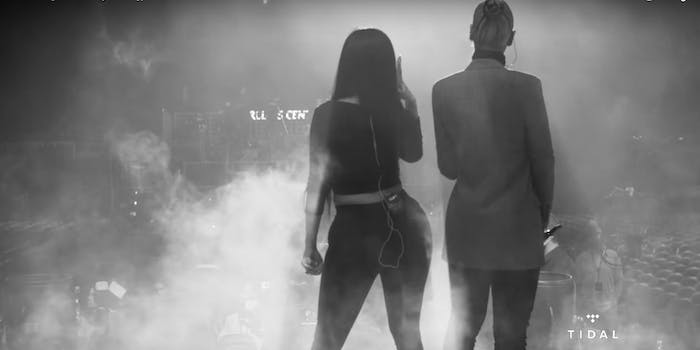 Her booty looked bigger in the magazines.

In a promo for the streaming service Tidal, Beyoncé reworks the lyrics to Prince‘s “Darling Nikki” and makes them about her pal Nicki Minaj. Specifically, her butt.

“Darling Nicki (Minaj)” was uploaded to Beyoncé’s YouTube channel to promote the video for their “Feeling Myself” performance at the Barclays Center Tidal X concert, and features behind-the-scenes footage of the duo rehearsing.

As for the lyrics themselves, they’re decidedly more PG than Prince’s originals.

Here’s a look at Prince’s verse:

And then Beyoncé’s update:

I met this girl named Nicki,
I guess you could say she was the rap queen.
I met her in the studio lobby,
But her booty looked bigger in the magazines.
She said, “Bey will you jump on this song of mine?”
How could I resist when I heard little Nicki rhyme?

A match made in heaven.