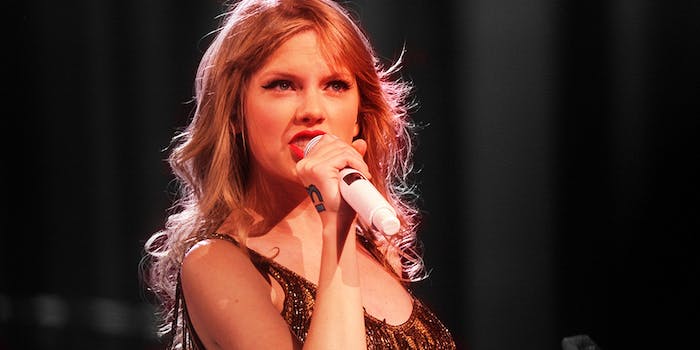 Let's figure this thing out, shall we?

Since Beyoncé’s new visual album, Lemonade, dropped on Saturday, the Internet has been a hot mess of speculation about who “Becky with the good hair” is. The line is from the song “Sorry,” which seems to allege that Jay Z has been unfaithful to Queen Bey.

In fact, the whole album follows the trajectory of a woman who has been cheated on by her lover, first seeking anger and revenge, before finally reconciling with the entire ordeal. The album also includes references to Beyoncé’s father and features appearances from the mothers of Trayvon Martin and Michael Brown.

But what fans really want to know is: Was there really a Becky? And if so, who is she?

Thus far, here is a list of all potential Becky contenders.

Immediately, Beyoncé fans singled out Rachel Roy, an American fashion designer, who posted an Instagram of her and her friends with the caption, “Good hair don’t care, but will take good lighting for selfies or self truths always…” She hashtagged the post #nodramaqueens.

Roy is also rumored to be the source of the now-infamous elevator fight between Beyoncé’s sister Solange and Jay Z.

The BeyHive came out in force to attack Roy, who then put her Instagram on private and later took to Twitter to not really clear up much of anything.

There is also a theory that Beyoncé was actually saying the word beki, which in Bengali means “wavy.” Roy’s father is Bengali.

Chef Rachel Ray got dragged into the fray on Sunday when Beyoncé fans confused her with Roy and dropped lemon emojis on her Instagram posts. Then there were others who just thought the whole thing was hilarious. Including Ray herself.

In a now-deleted Instagram photo, singer Rita Ora was seen wearing a bra decorated with lemons and a necklace that appears to have a pendant of the letter “J” (however, it could just be the mirror image of the letter “R”).

And if that wasn’t enough, Ora recently wore the same Gucci skirt that Beyoncé wears in the “Formation” video. She even wore it with that same J/R pendant from the Instagram photo.

There is also an elderly woman (well, at least according to her Twitter avatar she is) claiming to be a music industry insider who thinks it’s Rita Ora as well.

There was also that time that Taylor Swift wore a yellow shirt that declared, “Not Becky.” So, maybe her? 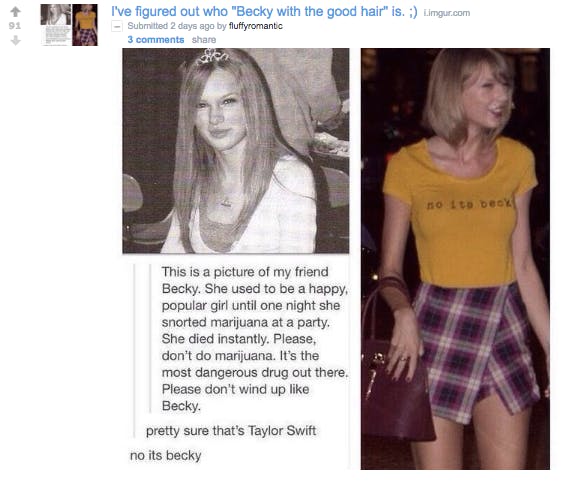 In 2014, rapper Liv released a song titled “Sorry Mrs. Carter.” In the song, she declares that Jay Z likes flawless model types, such as herself.

6) Other women from Jay Z’s past

Singers Rihanna and Tori Kelly, reality star Casey Cohen, and model Claudia Scheelen have all been linked to Jay Z through past rumors. And they all do have good hair.

On Twitter, Hanna Flint, the entertainment editor for Metro in the U.K., made a list of possible Beckys.

Made a list of potential Beckys to interrogate. #LEMONADE #Beyonce #Beckywiththegoodhair #Sorry pic.twitter.com/4ziCA20qwV

Also noted: Actress Lori Loughlin, who played Becky on Full House, took to Twitter to clear her name from any involvement.