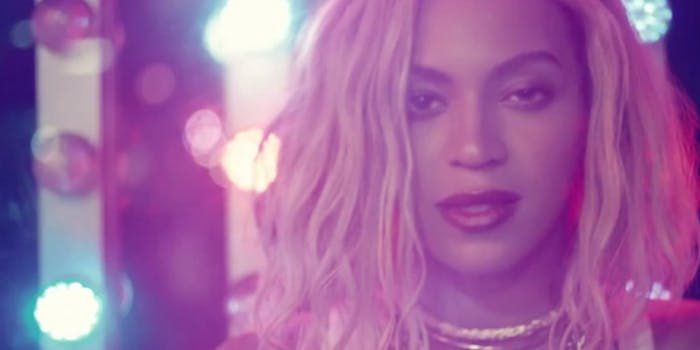 Bey confronts an issue that isn’t exactly being addressed by other pop stars.

Since the surprise release of Beyoncé in December, we’ve all been mulling over the themes of the album, and the roles she inhabits: artist, mother, wife, sister, sexual being. But mostly we’ve been debating whether Beyoncé’s a feminist, or whether she’s “allowed” to be. Now we have a new text to mull over.

The Shriver Report: A Woman’s Nation Pushes Back From the Brink—an annual published study by Maria Shriver and the Center for American Progress—was released on Saturday, and features an essay by Beyoncé Knowles-Carter, as well as pieces by Hillary Rodham Clinton, LeBron James, and Sheryl Sandberg, among others, with an emphasis on gender roles, work, and economic issues.

Mrs. Knowles-Carter’s piece, titled “Gender Equality Is a Myth!,” was released as a preview on Monday, and though it’s not groundbreaking news or a controversial stance, it’s an important topic that isn’t exactly being addressed by pop stars of an elevated status. Here’s the piece:

We need to stop buying into the myth about gender equality. It isn’t a reality yet. Today, women make up half of the U.S. workforce, but the average working woman earns only 77 percent of what the average working man makes. But unless women and men both say this is unacceptable, things will not change. Men have to demand that their wives, daughters, mothers, and sisters earn more—commensurate with their qualifications and not their gender. Equality will be achieved when men and women are granted equal pay and equal respect.

Humanity requires both men and women, and we are equally important and need one another. So why are we viewed as less than equal? These old attitudes are drilled into us from the very beginning. We have to teach our boys the rules of equality and respect, so that as they grow up, gender equality becomes a natural way of life. And we have to teach our girls that they can reach as high as humanly possible.

That Beyoncé’s essay was released as a preview is telling, and smart; the publishers of the report know which name will draw the most clicks and start the most debate. Much like no other pop star is singing about the pleasures of oral sex with her husband, or effects of body shaming, no other female pop star is addressing the income gap in this medium.

Beyoncé’s not exactly stating an unpopular opinion. This issue has existed for centuries and we’re still inching towards a solution. But hers is a voice that carries weight beyond academic discussion on gender inequality, and edges into the court of pop culture, where talk of income inequality is often downplayed. As the Wire noted, despite criticisms of her message in light of her class status, it’s more than other pop stars are “willing” to say about feminism and income inequality. She’s become an aspirational figure.

And, as Twitter confirms, she got men and women talking about the issue, which is the important part of moving a discussion forward and possibly affecting change.

You can download the 500-plus pages for free through Jan. 15, via Kindle or the Kindle app.