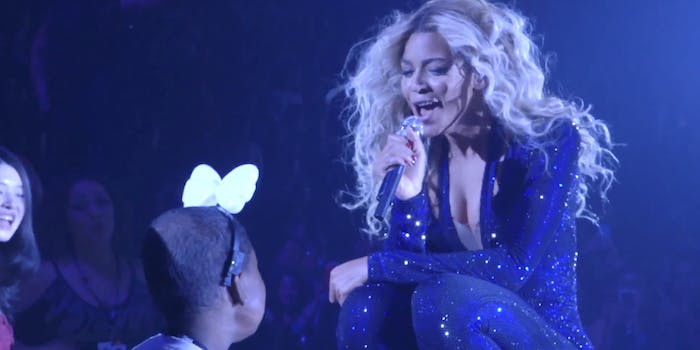 Warning: heart may melt and/or break.

Beyoncé has had a pretty spectacular December. She quietly released her self-titled album on iTunes and it shot to the top of the charts overnight. She embodied the holiday spirit and gave 750 people a $50 gift card to Walmart.

And now she made one dying girl’s wish come true.

Taylon Davis has an inoperable brain tumor, and her one wish was to dance with Beyoncé. The Make-a-Wish Foundation got involved, and the 12-year-old and her mom were flown out to Las Vegas to see Beyoncé perform for the Mrs. Carter World Tour.

Sure enough, Queen Bey made her way straight to Davis, and she didn’t disappoint. Not only did they dance, but they also sang together.

The encounter left Davis in tears, and as it turns out, many of us as well.