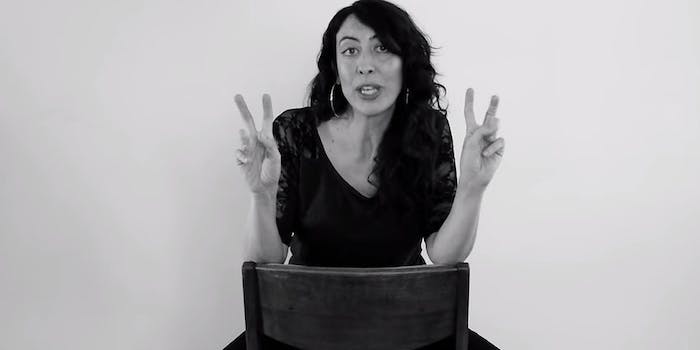 This woman is performing dramatic readings of Beyoncé lyrics

Nina Millin reportedly came up with the idea after butchering Beyoncé's songs at a karaoke performance.

What would Beyoncé‘s songs sound like without the music, dancing, and Auto-Tune?

They would sound pretty great, actually. Assuming they are being performed by Nina Millin.

Millin is the creator of “Beyoncelogues,” a series of YouTube videos in which she performs Queen Bey’s music as dramatic, spoken-word monologues. According to Esquire, she came up with the idea after butchering Beyoncé’s songs at a karaoke performance.

Millin’s delivery of the word “irreplaceable” has just as much power, if not more, than when Beyoncé soulfully drags it out to her signature, five-second-long pronunciation.

“I think I misunderstood how beloved Beyoncé is,” she told Esquire. “I think we’re really on to something here.”

While Millin only has three Beyoncelogues posted, she definitely aims to do more. Maybe she will branch out and include other musicians in her repertoire (who wouldn’t want to see a dramatic reading of, for example, Gangnam Style?).

Millin joins a long list of people with theatrical backgrounds who have turned popular music into memorable spoken-word art. She follows in the footsteps of such legends as this guy, whom you might have heard of.