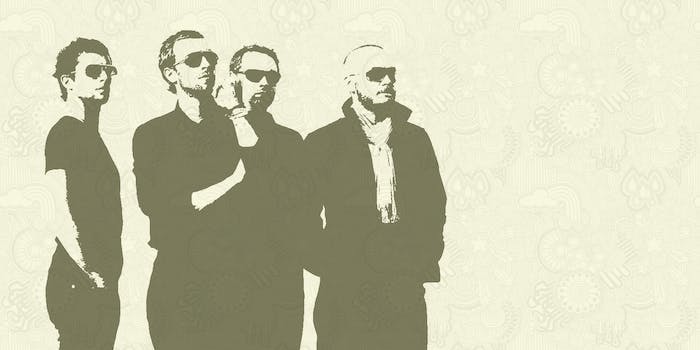 From Beyoncé to Coldplay, the art of the surprise release

Did Coldplay "pull a Beyoncé" with its new music video? Not exactly.

By dropping her own self-titled record last year with no promotion, an album recorded entirely in secret, Beyoncé didn’t just break the Internet. She broke our ability to release music. On Tuesday, Coldplay posted the video for “Midnight” to its Facebook page—a woozy, minimalist ballad that’s unlike anything the band’s ever put out before.

Is it just a one-off track or a band headed in an entirely new direction? The Internet was left to wonder, as Chris Martin and company didn’t provide an explanation for its release.

Because of the surprise nature of the track, the media immediately branded it “pulling a Beyoncé,” which is the most painful sounding phrase of the year. With no disrespect to Ms. Carter, Beyoncé didn’t invent the “no-press” strategy and to give her credit for it completely ignores the entire musical context of her act. Beyonce wasn’t the first to release a surprise album; she wasn’t even the first person to do so in 2013. Last January, David Bowie celebrated his birthday by giving his fans the best possible present: His first album in a decade, The Next Day.

The Magic 8-Ball indicates that Beyoncé Knowles was likely paying attention: “You may rely on it.”

In March of 2013, Beyoncé previewed “Bow Down,” her first track in what was promised to be a forthcoming album, but the track failed to catch on with her audience, blasted for being “anti-feminist.” Beyoncé has long discussed her wish for more role models for young women, saying that she hopes to give girls interested in music someone to aspire to be. Critics felt that the lyrical content “Bow Down” was hypocritical given that desire. (Sample lyric: “You dreamt of being in my world/ Don’t forget it, don’t forget it/ Respect that, Bow down b—ches.”)

In an essay for the Washington Post, columnist Rahiel Tesfamariam called the track from the self-avowed feminist “anything but empowering.” “It promotes female subordination and division,” Tesfamariam wrote. “The lyrics are in direct contrast to past statements she has made about wanting to inspire other women to enter and be successful in the music industry.”

After the backlash, reports indicate that Beyoncé’s album was set to be pushed back, but instead it just disappeared. What changed between March and last December, when her surprise album dropped? Beyonce got smarter about promoting her material.

Throughout her career, Ms. Knowles has seamlessly borrowed from other musicians and artists, famously adapting Bob Fosse’s “Mexican Breakfast” dance routine for “Single Ladies (Put a Ring on It).” Although critics have chided her for skewing too close to plagiarism, Beyoncé has gotten better at transforming her influences as she matures as an artist. What makes Beyoncé’s “Countdown” such a delight is the way it makes references to Audrey Hepburn’s “Funny Face” to creating something fresh and innovative, a true moment in music history.

That’s exactly what made BEYONCE such a powerful statement—the fact that her work didn’t emerge in a vacuum. Beyonce Knowles used the inspiration of her heroes, those she looked up to as a young girl, to further change the way we make music, simply by liberating herself from the backlash circle jerk. Bowie might have been thinking about The Next Day, but Beyonce was focused on the next step forward.

Like Beyonce, Coldplay’s “Midnight” is the sound of a band transformed by its influences, one arguably better than ever. I’m an avowed Coldplay non-fan. I like Chris Martin’s music best when he sounds the least like Bono, the man he’s been intent on imitating his entire career. Coldplay is a band comprised entirely of influences, from U2 and Radiohead to Joe Satriani, whose melody Martin reportedly cribbed for “Viva La Vida.”

But their best moments show them doing something more than copying the greats. “Lost,” off Viva La Vida, takes its trademark Brian Eno production and makes it simultaneously dance-ready and emotionally resonant. “Princess of China,” the band’s collaboration with Rihanna, is objectively not good—with some of the most openly nonsensical lyrics in recent memory. However, “Princess of China” is also delightfully bonkers, a band finally unafraid to do something different, even if it means completely alienating its fanbase. It’s ballsy and thrilling, words impossible to muster about anything on X&Y, an album best described as “cradle rock.”

“Midnight” is a lot like “Princess of China” in that it completely breaks from the Coldplay template. More than anything, “Midnight” sounds like a Bon Iver song, all atmospherics and washed-out vocals. It’s also, by far, the best thing they’ve ever done, a moment that doesn’t need explanation. Some artists, like Lady Gaga, have to constantly remind you how great their music is, using press junkets to will us into loving their music. In an Internet media cycle dominated by hyperbolic hustle, the surprise release is a reminder that great music speaks for itself.

However, the fact that Beyonce didn’t come up with the strategy all on her own shouldn’t be a strike against her. It’s just another reminder of what makes her an icon. In her music, Ms. Knowles sings that about the rising tide that lifts all boats, a culture in which we inspire greatness in each other. David Bowie once sang that we can be heroes. Beyonce was clearly listening. You may rely on it.

Photo by niteprowl3r/Flickr (CC BY 2.0) | Remix by Fernando Alfonso III