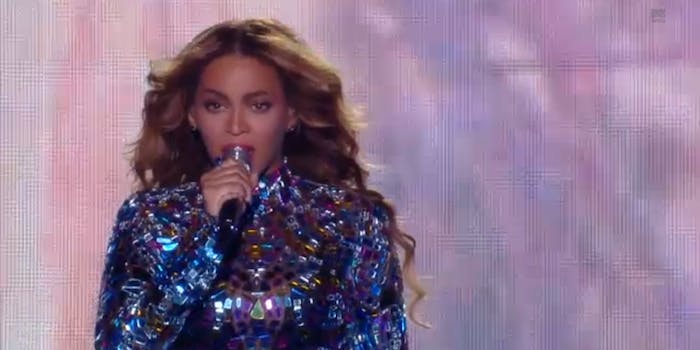 Blue Ivy stole the spotlight from Beyoncé at the VMAs

It’s Beyoncé’s world and we’re just here to watch it.

It’s Beyoncé’s world and we’re just here to watch it.

Sure, the rest of the VMAs might be worth catching up with the next morning, but it all came down to Beyoncé taking the stage in the final performance of the night. Before the show, she was one of the most buzzed-about people attending, even after arriving late, and she was to receive the 2014 Michael Jackson Video Vanguard Award.

The entire setlist might’ve leaked early, but everyone watching still became instantly glued to their TVs as Beyoncé took the stage and performed a 16-minute medley of her self-titled album.

And viewers were treated to 16 minutes of near flawlessness with the one person who could take away the spotlight from the Queen.

When it came to Beyoncé accepting her award after the medley, she was joined by a surprise guest, as teased by MTV. And that guest happened to be none other than Blue Ivy, held by Jay Z in a display of love and affection that may quench some of the divorce rumors for now.