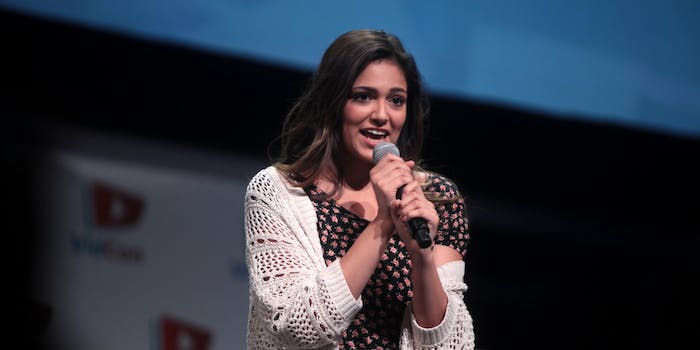 She's already got over 8 million subscribers on her side.

One of the brightest faces of YouTube is about make an impression on the rest of America.

YouTube beauty and fashion guru Bethany Mota joins Olympian Lolo Jones, actor Alfonso Ribeiro (and his Carlton dance), fashion designer Betsey Johnson, and nine other celebrities on the cast for the 19th season of Dancing With the Stars. Good Morning America made the announcement earlier Thursday, and it’s the first time that DWTS has dipped into YouTube in search for the celebrity cast.

The news that Mota would be joining the cast was first reported last week when many of the names on the casting list leaked, but nothing was confirmed until today’s official reveal.

After the segment aired, Mota took to Twitter to announce the news for those who may have missed it.

ITS TRUE!!! I’m going to be on this season of Dancing with the stars!!!! AHH! My partner is @derekhough what should our team name be?! 💃🌟

“I think it’s going to be very interesting because I’ve never done anything like this before, so it’ll be a fun experience,” Mota said. Hough, whom she’s already started training with, told GMA that “she’s great, she’s got some sass.”

Her two YouTube channels have more than 8 million subscribers combined and may help bring in an audience who might not normally watch DWTS to keep her on every week.

It’s safe to say that her fans are excited.

BETHANY IS ON MY TV I CANT #bethanymota SHES FLAWLESS IM TRASH pic.twitter.com/rFywjm1jnT

OMFG BETHANY MOTA ON DANCING WITH THE STARS #DWTS #BETHANYMOTA

BETHANY I know it’s tempting, but try not to twerk when ur dancing on stage ok?😂👏💕 #DWTS @BethanyMota #TEAMBETHANY