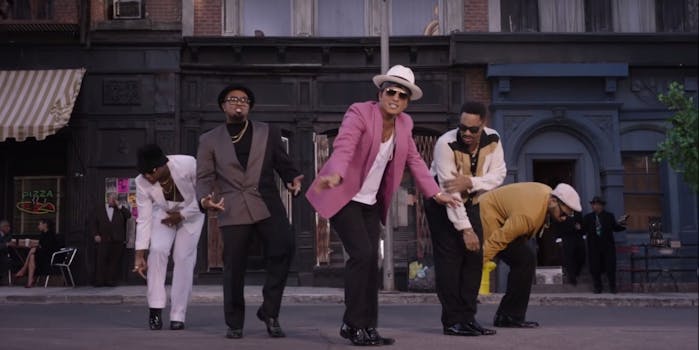 The 10 commandments of a perfect wedding reception playlist

If you pick and choose from these 100 songs, you can't go wrong.

If there’s one area where you can afford to cut back on your wedding, it’s the DJ. The right Spotify or iTunes playlist can carry your reception with relative ease. Here’s what you need to know to pull it all off with style and grace.

I’ve created a cheat sheet of sorts for you to work from. It’s stacked with 100 songs that should work at just about any setting, and they’re loosely grouped into some standard themes: slow jams, uptempo R&B, indie rock, country, old-school rap, and contemporary classics. You’ll figure it out, I’m sure, but it’s worth noting that some notable artists (see: Prince) and tracks are missing due to the limitations of Spotify. Your ideal playlist should be around two and a half hours but plan for three just in case.

Let’s be honest: Nothing lulls a crowd quite like a mother-son dance. You’re going to need a shot in the arm—or an open bar—to quickly rebound. We have plenty of recommendations to choose from on the playlist below, but this is one area where you really have to use your own discretion. What track do you think will have the most immediate impact? Start there. Still worried? Task your best man and maid of honor with being the first ones on the dance floor. (For my wedding, it was Prince’s “Let’s Go Crazy”—and it went off like the 2007 Super Bowl.)

The No. 1 mistake people make in karaoke is pulling out an esoteric song of personal significance. At that point,you might as well be auditioning for The Voice. The same holds true for your wedding reception. Play the hits that are going to resonate with your guests. This night isn’t about indie cred, so don’t force it. The people want “Uptown Funk.” Let “Uptown Funk” you up.

3) Cover all your bases

If you’re lucky, your wedding will capture different chapters of your life—everything from your childhood friends and collegiate contemporaries to your extended family and old family friends. Try not to leave anyone out, but don’t resort to “YMCA” either. Your best bet: “Shout” by the Isley Bros.

Your playlist is a summer blockbuster that should play out in chapters. It’s not just about finding the perfect Stevie Wonder song but couching it with the right Motown classics to keep the mood right for at least a few minutes longer. I split my wedding playlist into distinct blocks based on genres; I’d devote no more than 15 minutes to each segment. Here’s a quick example of an ideal three-song set.

5) Don’t skip on the subwoofer

Your standard PA rental likely won’t include a standalone subwoofer. With the money saved from doing this yourself, you can invest here. As Meghan Trainor made clear, it’s all about that bass.

I’m not saying don’t play Juvenile’s “Back That Azz Up”—I played it at my own wedding—but timing is everything. As eager as you might be to drop it like it’s hot, consider your grandparents’ bedtime. Hold the raunchier material for late in the second hour, and even then, yield the floor to radio edits.

7) Save a special moment for yourself

The majority of the night you want to focus on your guests, but it’s OK to steal a moment away for yourself, too. After our cake-cutting, I queued up a song that was meaningful to me and my wife, knowing full well that we’d likely be alone on the dance floor. It was like getting a second first dance, and I’ll never forget it. (If you’re curious, it was Peter & the Wolf’s “Silent Movies.”)

Michael Jackson’s “Don’t Stop ’Til You Get Enough” is an untouchable classic, but its original Off the Wall version runs past the six-minute mark, and there are diminishing returns after about three. Even the best tracks can outstay their welcome and kill your momentum on the dance floor. Seek out single versions or radio edits for anything pushing the four-minute mark. And if you’re really serious, edit the material yourself using Audacity to fade out when the time is right (more on that below), but that’s not for the faint of heart.

Even with the perfect playlist, you need someone handling basic introductory duties on the microphone—someone announcing the first song, when it’s time to cut the cake, etc. You don’t need them to work the ones and twos to play the hype man—your playlist will carry the evening—they just to be comfortable and confident enough to press pause and address the crowd when needed. Print out an itinerary to give them an idea of what’s expected and when.

10) When in doubt, play Beyoncé

No other contemporary artist can jolt a room faster than Queen Bey, and her catalog runs deep. Start with “Single Ladies (Put a Ring on It)” and “Drunk in Love,” but break the glass with “7/11” in case of an emergency. Consider one Beyoncé track an hour a bare minimum.

You’re still here? OK. That means you’re ready for the final step. If you’re on a Mac, editing tracks with Audacity is relatively easy (and this is coming from a guy who got his first Apple computer at 29). I won’t get into the technical details here—there are plenty of guides for you to reference—except to say that I’d recommend fading most songs out after three minutes.

Once you commit to manual editing, it opens all sorts of possibilities—not least of which are mashups. Start simple: Rick James’s “Super Freak” and MC Hammer’s “U Can’t Touch This” are basically the same song. Ditto for Marvin Gaye’s “Got to Give it Up (Part 1)” and Robin Thicke’s “Blurred Lines.” My go-to: Anything by Ray Charles into Kanye West’s “Gold Digger,” or the Isley Brothers’ “Between the Sheets” into Notorious B.I.G.’s “Big Poppa.”

It’s easier than you expect, and it will turn some heads.