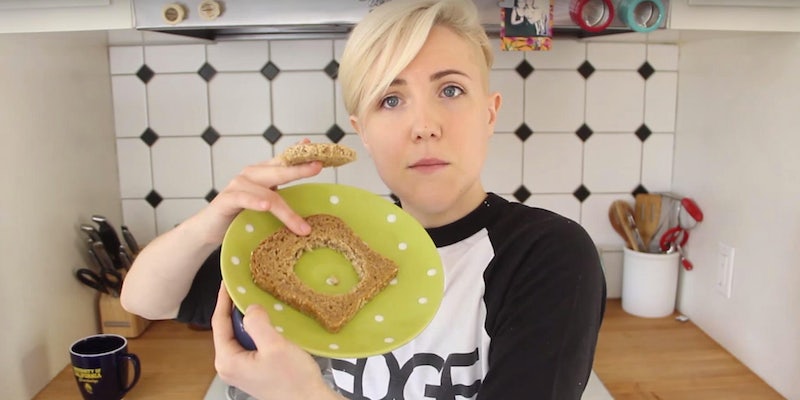 7 webseries you need to watch now

Ready to get lost in the rabbit hole of No. 3?

This may be the age of peak TV, but that term excludes scads of funny, interesting, relevant programming that you can’t access with a remote and cable connection. As any cord cutter can tell you, there’s a revolution happening in the webseries genre that could give those premium networks a run for their money any day of the week.

Here’s just a handful of some of the best webseries today.

1) The Conversation with Amanda de Cadenet

Once a short-lived television show airing on Lifetime, The Conversation is now a webseries juggernaut, residing at the top of a lot of “best-of” lists.

The show bills itself as a “totally alternative interview series with women who have a story or experience to share,” but that doesn’t really do it justice. It features all sorts of female celebrities candidly and frankly answering questions about everything from advice to their 14-year-old selves to their worst vices.

It has an off-the-cuff vibe that makes it seem like we’ve caught these two women in the middle of a conversation, possibly in the bathroom of a party of a mutual friend. It’s nothing to hear the ladies laughing about their kids, crying about their struggles, or commiserating about their husbands.

2) The Misadventures of Awkward Black Girl

This series, in the vein of Broad City or Girls, takes on millennial culture, but unlike those other shows, it has a much broader appeal. Populated by characters that haven’t been editorialized by Hollywood standards, it’s funny, cool, and effortlessly performs as edgy satire.

Written, produced, and directed by Issa Rae, the series follows “J” as she navigates work, love, and friendships as a 20-something black woman. The production quality isn’t as high as some of the other series, but that lends it a personality that sometimes gets lost in the glossier productions.

Awkward Black Girl has gained such popularity that it has been optioned by HBO for a half-hour comedy, debuting in early 2016.

In this episode, J starts to consider taking her relationship with her boyfriend, White Jay, to the next level.

Hannah Hart isn’t really a chef, and this webseries isn’t as much about making food as it’s about making fun of making food. Pretty and effervescent, Hart offers as much light-hearted life advice and silly commentary as she does recipe knowledge, and the series is all the better for it.

My Drunk Kitchen started as a pen pal project to keep in touch with a friend on an opposite coast and soon went viral from there. Hart takes on dorm food like saltine nachos but doesn’t shy away from the hard stuff either, like eggplant parmesan or sweet potato mousse.

Swilling booze and talking directly to the camera, Hart charms the pants off viewers and they never even realize they just got terrible cooking advice. She’s even translated that charm into an actual cookbook, My Drunk Kitchen: A Guide to Eating, Drinking, and Going With Your Gut.

In this episode, Hart works on the second of three episodes she shot in one day, and you can see her buzz turn into full on tipsy as she tries her hand at baked brie.

Oh, the angst. Oh, the ennui. Oh, the judgment. Ingrid Jungermann plays a grumpier version of herself in this acclaimed webseries. The show’s Ingrid is a middle-aged lesbian who is also a giant curmudgeon, bemoaning everything from current PDA trends to modern medicine.

The series has received tremendous critical love, and its second season aired in May with funding from the prestigious Spike Lee Production Award. The humor is wicked and biting but just self-deprecating enough to keep it endearing.

If Larry David were a 40-something lesbian contemplating his place in the world, this would be his show. Season 2 had all sorts of fun guest stars, including Janeane Garofalo in this episode, playing a haughty doctor trying to accommodate Ingrid’s weird and awkward medical requests.

Celebrities can take themselves so seriously, but production company Above Average and SNL alum Vanessa Bayer are happy to take them down a peg.

On Sound Advice, Bayer plays media coach Janessa Slater, who invites musicians to the show so that she can fix what’s wrong with their lives and careers. She asks the tough questions—like when she asked Nick Jonas, “Is your first name short for ‘Nickelodeon?’” What’s even better is that the artists play along… mostly.

What’s so clever about this show is that you can never really tell how much the guest is in on the joke. The wilder Janessa gets with her “sound advice,” the more put out some of the guests seem, and that’s when it gets really good.

Nick Jonas is a good sport, especially as she suggests that all his songs be one word long.

6) Comedians in Cars Getting Coffee

Even folks who wouldn’t know a webseries if it bit them on the ankle have heard about this show, mostly because it stars Jerry Seinfeld.

Seinfeld invites his comedian friends out for coffee and the pair ride in his ridiculously comprehensive collection of classic cars. Jerry and friends chat about myriad topics, and it usually devolves into one or both of them laughing in hysterics.

Of course it’s funny, but it also feels very behind-the-scenes, like we’re eavesdropping on Seinfeld and his buds as they shoot the breeze backstage. The episode with Julia Louis-Dreyfus feels particularly voyeuristic, and the Internet exploded about her appearance on his show, calling it “the Seinfeld reunion” you’ve been waiting for.

It’s funny in about a hundred different ways, but the cars are so tiny and expensive that real entertainment starts when the guests try to get in and out of them. Take a look at a supercut of the “in and out,” and try not to laugh at the silliness.

7) Making a Scene With James Franco

James Franco does his best work when audiences don’t really know what to make of him, and the AOL Original Making a Scene is Franco at his absolute best.

Season 1 mostly took on movies, and one of the best episodes of the season was “Dirty Dogs,” in which Franco and troupe mashup the ear-cutting scene from Reservoir Dogs and the “nobody puts Baby in a corner” scene from Dirty Dancing.

It’s silly and weird, but delivered through the James Franco filter, it’s hard to resist.

Evolving to reflect the uptick in quality television, Making a Scene now produces crossovers of the most infamous shows in popular culture. The Breaking Bad/Sex and the City combo “Breaking Sex” is particularly affecting.