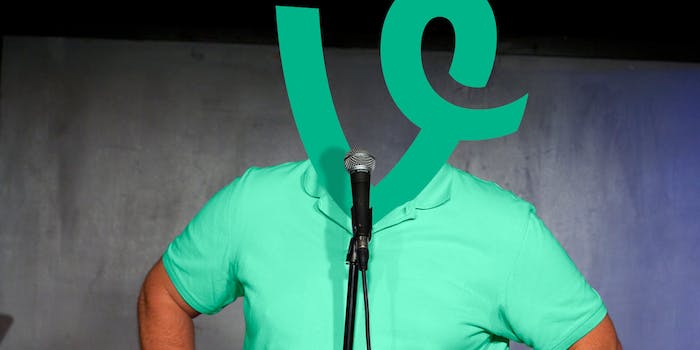 8 people who are doing comedy right on Vine

What’s genuinely funny or original and what’s on the “popular” page are often very different.

As Vine has progressed as a platform for comedy, the question of what’s funny has become more difficult to answer. What’s genuinely funny or original and what’s on the “popular” page are often very different.

We’re now living in a time when the “Broom Broom” girl has become an international meme, an exercise in absurdity. The clip has been viewed more than 14 million times, and it succeeded precisely because of Vine’s six-second format. You have to get in and get out on Vine. There has to be quality control.

Teens have taken over the platform, for better or worse, and while their popularity is often ponderous, there are people with a smart sense of humor expanding the boundaries of the app. (And, often, making fun of the Nash Grier industrial complex).

Chris Melberger is perhaps best known as the guy who repeatedly scares his girlfriend on Vine, which either joined or elicited a weird Internet tradition of guys scaring their girlfriends on camera. (Ladies, are we not scaring boyfriends? Can we get on that?) He says his videos go through the proper channels before he posts.

“If it makes me laugh, then it’s funny,” he told the Daily Dot. “That’s how I decide if I will post it or not. Making that decision is hard because I am my own biggest critic. Next up on the critic express is my dad. I can text him a draft of an idea and if his response isn’t an immediate ‘hahaha’ or ‘nice one!,’ then it’s either not amusing or just a topic he is unfamiliar with.

“A lot of my content stems from everyday situations and how I can handle it in the most awkward way possible. I really enjoy poking fun at mainstream things as well, and that is when a Vine of mine usually does best.”

Melberger says a lot of comedians, like Will Sasso, who has perfected the art of Vine, have left the app or stopped posting as frequently.

“Earlier on, Vine was about content and creating it within the app,” he said. “Now it’s a lot of overused meme jokes, heavily edited clips with rap or dubstep music placed over it, and teenage boys/girls lip syncing semisexual songs to their camera. It’s a free app and anyone can use it however they want, it’s just unfortunate that what is deemed ‘popular’ is the first bit of content a new user will see.”

“I don’t mind a younger demographic,” he added, “but seeing grown men do sketches about high school just for ‘likes’ has had me question the integrity of several users.”

Here are a few more people who are doing Vine right.

Herber’s vines are a head rush. There’s a sharp aesthetic to her more design-focused pieces, but there’s also a bit of gleeful horror to her clips. Vine is tailor-made for animation, and Herber’s taken it to the edge.

Like Sasso, comedian and writer Nancherla is another performer who’s mastered the format. Her surreal conversations are often those we have in our heads as we commute home from work but don’t say out loud. She and Maria Bamford need their own show.

This account is more a collection of weird bits of Internet detritus, but it’s a good resource if you do, indeed, want to get lost in an Internet memory hole.

Demi Adejuyigbe’s vines are both inventive and funny, and his Oscars series was especially good. Keep an eye on him.

Monsen’s a writer for Billy on the Street, in which comedian and actor Billy Eichner challenges celebrities and people on the street to absurd challenges while yelling at them. Monsen uses Vine’s looping feature perfectly.

Braunger’s a comedian, and he excels at observational humor. You know, it’s the little things in life.

We wrote about Bowen last month, but it’s worth repeating that calling out your haters and being completely self-aware is what Vine was made for.

Vine is also about terrifying people, and if you’re going to do it right, make sure you’re doing it as a terrifying crab-woman hybrid.