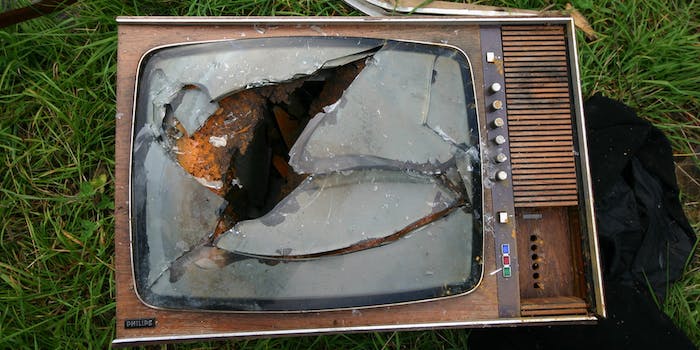 For every sitcom that makes it on television, there are dozens and dozens that never even have the opportunity.

For every sitcom that makes it on television, there are dozens and dozens that never even have the opportunity to develop a following. Many get moved to a ‟guaranteed death” time slot on Friday nights, and then see their legion of devoted fans mount an ultimately unsuccessful campaign, mailing thousands of packages of marshmallows to network executives in the futile hope of avoiding cancellation.

Take, for example, Susan 313, an unaired Sarah Silverman sitcom. NBC passed on it last year. The show featured the famously foul-mouthed comedian moving back into her her old apartment after ending a decade-long relationship with her boyfriend, played by Jeff Goldblum.

Earlier this week, Silverman posted the unaired pilot for the show on YouTube. “This isn’t like, ‘can you believe they didn’t pick this up?’” Silverman explained in a short video introduction to the pilot. “They probably did the right thing. But we liked the show.”

Susan 313’s online attention is unique. It prompted redditors to dig up a bunch of other unaired pilots, like the Conan O’Brien–penned Lookwell! (see below). They had a lot to choose from. In recent years, YouTube has become a museum for pilot episodes of TV shows that never quite made it to air. As a result, many of these shows developed cult followings.

We rounded up some of the best/worst unaired TV pilots available online:

Years before Family Guy creator Seth MacFarlane reminded people around the world of the old truism ‟everything said by Adam West is hilarious,” Conan O’Brien teamed up with Saturday Night Live producer Lorne Michaels to create Lookwell! The pilot, which featured West as a washed-up TV star who takes up fighting crime, became a hot commodity on eBay before it was uploaded to YouTube.

There are two types of people in the world. There are the those who, after learning about a sitcom written by Dan Harmon of Community fame, directed by Ben Stiller and starring Jack Black as a super-intelligent astronaut who loses his powers at night and has Owen Wilson as his talking motorcycle sidekick, cannot function as human beings until they watch it. The other group of people sit around depressed all day because they are incapable of enjoying the greatest episode in the history of unaired entertainment.

A few years after HBO yanked the seminal sketch comedy Mr. Show with Bob and David off the air, Bob Odenkirk joined with some of the biggest names in the alternative comedy scene—from Fred Armisen and Zack Galifianakis to Patton Oswalt and Brian Posehn—for another skewed series of sketches largely anchored around a fake TV news broadcast. Instead of picking up the show, Fox decided to go with Cedric the Entertainer Presents; Odenkirk went on to become Walter White’s lawyer.

Admit it: If there were an episode of Curb Your Enthusiasm where Larry David came up with the idea for leather jogging shorts, had said idea stolen, and then got aggravated after everyone made fun of him when he complained about it, no one would have batted an eye. What about if David had interrupted Taylor Swift’s acceptance speech?

Yeah, Larry David and Kanye West are the same person… almost. The difference is that when David teamed up Larry Charles, one of the creative masterminds behind The Simpsons and Borat, the result was a long-running series on HBO. When Kanye West attempted a similar feat, his show was never picked up. The pilot, which was released on YouTube over the summer, was slammed for being painfully unfunny. But in an interview with TV Guide, Charles reveals a pretty brilliant bit. Charles recalled a scene where West flubbed a charity promo he was recording for the Make-a-Wish Foundation by saying, ‟Yo, whattup to all the dying kids. I know y’all my dawgs. And you know, all dogs go to heaven!”

Some pilots make the jump to full series but lose something in the translation. In the pilot for 30 Rock, the main thing lost was Tina Fey’s former SNL costar Rachel Dratch, who originally played the role of Jenna Maroney but was later replaced by Jane Krakowski.