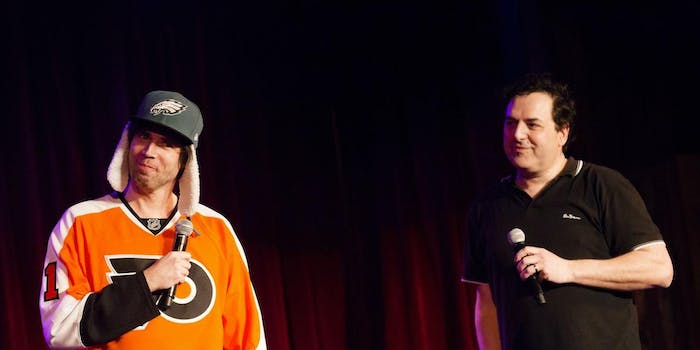 'Google is a terrible company whose crimes against humanity are legion.'

The Best Show host Tom Scharpling does quite a few call-outs on his weekly call-in show, but last night on Twitter, he took aim at a new target: Google.

In a series of tweets, Scharpling accused Google of lifting a song referenced on the show, “Come On Y’all It’s Time to Have Fun,” and using it in a new Chromebook ad.

Scharpling has long referenced the song on the show, mostly as a recurring joke about what the most bland, insipid commercial jingle/club hit would sound like—something that has now apparently been turned into a real commercial jingle. Best Show contributor Jake Fogelnest tweeted an audio clip from 2013, and Friends of Tom (as Best Show fans are called) have pointed out other moments when the song was joked about.

Is someone at Google secretly a FoT? Is this a very meta joke? Reached for comment, Scharpling told the Daily Dot that he has not yet received a response from Google, but sent along this statement:

Google is a terrible company whose crimes against humanity are legion. And shamelessly ripping off content from a radio show that I have written and performed for free over the last fifteen years is merely their latest shameful act.

I will be pursuing this matter to the fullest extent of the law. Future updates and new episodes of The Best Show will be posted at www.TheBestShow.net.

The good guys will win in the end!

The song was fleshed out by Nick Thorburn from the band Islands in January 2013, and fans even made a ringtone out of it.