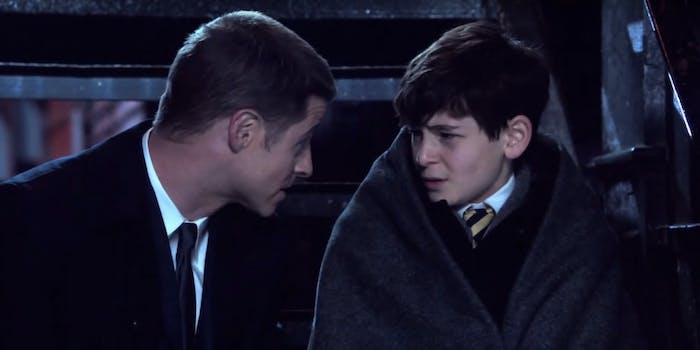 The 8 best prequels and how to watch them without cable

The perils of prequels are many.

A prequel is a tricky thing, and the perils of it are best enumerated in Patton Oswalt’s classic routine “At Midnight I Will Kill George Lucas With a Shovel.” That tirade was of course directed at Lucas’ much-derided Star Wars prequels, and it allowed Oswalt to introduce the refrain, “I don’t give a shit where the stuff I love comes from! I just love the stuff I love!”

Prequels can very easily wander into TMI territory, not to mention the inherent lack of suspense when you already know certain characters’ fates. Still, Hollywood is showing no sign of losing interest in the concept, with TV prequel spinoffs for both the Taken franchise and FX’s Sons of Anarchy in the works, to name just a couple. With AMC’s Fear the Walking Dead having just wrapped up, we decided to revisit some of the other TV prequel series that have come before, and where you can see them.

A Psycho prequel series about a teenage Norman Bates? At first that idea sounds as bad as, well, making a shot-for-shot remake of the movie starring the guy from Swingers. Thankfully A&E’s Bates Motel proved to be much more than the easy punchline it could have been.

Much of that success owes to some truly stellar casting in the form of Freddie Highmore (Finding Neverland) and Vera Farmiga (Up in the Air) as young Norman and his mother Norma, respectively. After the death of Norman’s father, the pair move to a small town in Oregon and purchase the one-day infamous motel, hoping to start a new life. Unfortunately, trouble soon finds them after a tragic event exposes Norman’s own… proclivities. Their new hometown is also full of secrets, but the main attraction here is watching the dysfunctional relationship that could only be retroactively referenced in Alfred Hitchcock’s film, and the slow formation of one of cinema’s most iconic psychos.

Seasons 1 and 2 are available on Netflix Instant. A&E has already renewed Bates Motel for fourth and fifth seasons, to air in 2016 and 2017, respectively.

Pretty much nobody was left in a good place at the end of Breaking Bad, but the opening of prequel spinoff Better Call Saul reveals that sleazeball lawyer Saul Goodman wound up… actually, exactly where he predicted in an earlier episode: living under an alias and managing a Cinnabon in Omaha, Nebraska.

But Saul Goodman wasn’t always Saul Goodman, and Better Call Saul dials the Wayback Machine to 2002, when Saul was still James “Jimmy” McGill, a public defender struggling to make ends meet and caring for his ailing brother. So why did he change his name and how did he become the go-to legal guy for Albuquerque’s criminal elite? When he crosses paths with a gangster named Tuco, his collision course with one Walter White is set in motion, and there’s no turning back.

Sadly, Better Call Saul hasn’t hit any of the three major streaming services yet, but you can purchase episodes from Amazon Instant Video and other digital providers. Better Call Saul was renewed and is expected to return for a second season in early 2016.

“Pirates” is one of those genres television hasn’t really delved into much, maybe owing to the fact that you need at least one convincing boat replica or else viewers will start complaining that nobody on the show ever goes above deck, and boats are expensive. Starz’s pirate drama has the requisite boats, and it also happens to be a prequel to the novel Treasure Island, exploring the timber-shivering career of Captain Flint and his pirates some two decades before the events of Robert Louis Stevenson’s novel. The show mixes fictional creations like Flint with real-life icons of the golden age of piracy, including Blackbeard. But since this one’s a prequel to a piece of literature, you crazy kids will have to actually crack a book to find out the endgame. Or, you know, one of the dozens of movie adaptations of Treasure Island. Or CliffsNotes. Or Wikipedia.

Some of Starz’s shows eventually make their way to Netflix once they’re concluded, including Spartacus, Boss, and Magic City. Black Sails is still chugging along, already renewed for a fourth season with the third not premiering until January 2016, so I wouldn’t expect it on Netflix anytime soon. You can, however, grab episodes on Amazon Instant Video.

After wrapping up the critically and fan-beloved Battlestar Galactica remake in controversial fashion, it’s not surprising that Syfy wanted more. But how do you spin off a series that has very definitively wrapped up its storyline? The answer was to go backwards.

Caprica is set 60 years before the Cylon destruction of the Twelve Colonies that kicked off Ronald Moore’s reimagining of Glen Larson’s cult sci-fi classic. Eric Stoltz stars as Daniel Graystone, who stumbles onto the beginnings of what will become the Cylon race after a terrorist attack fells his daughter. Moore has said that “everything about Caprica was designed specifically to not repeat what we had done in Galactica,” and the show proved to be too far a deviation to keep bringing back fans who might have been hoping for something more action-oriented, such as a look at the first Cylon war. Still, Caprica is an interesting but flawed show that could have become something even greater if it had survived long enough to find its footing.

This one’s a case of terrible timing: Caprica just got yanked from Netflix Instant’s catalog. So if you want to see it, you’ll have to hit up Amazon or other digital services.

It wasn’t that many years ago that Walking Dead creator Robert Kirkman was adamant we’d never see the actual beginnings of the zombie outbreak that continues to make life difficult for Rick Grimes and company. Still, time (and money) changes minds, and so this summer we got precisely that in the form of Fear the Walking Dead, a (terribly named) AMC prequel series set in Los Angeles right as the undead shit begins to hit fan.

Like its parent series, Fear the Walking Dead explores the zombie apocalypse through the eyes of a diverse cross-section of ordinary people, and how “when civilization ends, it ends fast.” Reaction to the prequel spinoff has been decidedly mixed, but a second season has already been ordered for 2016. In the meantime, there’s also the tie-in webseries Flight 462, aka “zombies on a plane.” What those people need is a brooding redneck with a crossbow.

Fear the Walking Dead just wrapped up its six-episode first season, but you can purchase episodes from Amazon.

Hollywood has been retelling Batman’s origin story for seven decades now, but where most incarnations of the Dark Knight fast forward from his tragic origins at least past puberty, Gotham is all about exploring the early early days. It’s a choice that doesn’t always serve it well, frequently straining the bounds of credulity and introducing characters who will be interesting in a decade or so once they acquire a taste for colorful costumes.

Then again, the show also gave us the delight that is Robin Lord Taylor as Oswald Cobblepot, the low-level crook who will someday become better known to Gotham as The Penguin. If there’s any single element that makes it worth suffering through Gotham’s sillier moments, it’s Taylor, although young David Mazouz is also surprisingly good as a young, haunted Bruce Wayne, even if the show’s writers don’t always know what to do with him. The less said about Jada Pinkett Smith’s Fish Mooney, however, the better.

7) Spartacus: Gods of the Arena

Of all the shows on this list, this one is the only one with its roots in a real-life tragedy. It’s impossible for many fans to separate Gods of the Arena from its heartbreaking real-life backstory—the death of Spartacus star Andy Whitfield from Non-Hodgkin’s Lymphoma in 2011—but thankfully the series is strong enough to stand on its own in spite of those associations.

John Hannah and Lucy Lawless were two of the best parts of Spartacus’ freshman season, playing the deliciously conniving Batiatus and Lucretia, so Gods of the Arena would be more than worth watching even if it just meant getting to see more of them. Thankfully there’s plenty more to appeal about Gods, including many of the rest of Spartacus’ outstanding supporting cast, as well as Dustin Clare as Gannicus, a rockstar gladiator who would return to play an important role in the rest of the series.

Spartacus: Gods of the Arena is available streaming on Netflix Instant. While it is a prequel, it should be watched after the first season of the parent series, because spoilers.

Enterprise is set over a century before the adventures of Kirk and Spock, following Captain James Archer (Scott Bakula) and another ship called Enterprise. It also holds the ignominious distinction of being the show that ended a nearly 20-year run of at least one Star Trek series being in production. It’s a show that kept trying to find itself—or reinvent itself—throughout its four-season run. It still suffered from the same problems of its predecessor Voyager, the same formulaic predictability that came inevitably from being lashed to a massive franchise with a vested interest in maintaining the status quo. Still, the show had its moments, and I still have a soft spot for Manny Coto’s TOS-worshipping fourth season. Enterprise is more a cautionary tale than a successful prequel, and a compelling argument that you shouldn’t go back before the beginning unless you’ve got a solid reason to and a worthy story to tell.