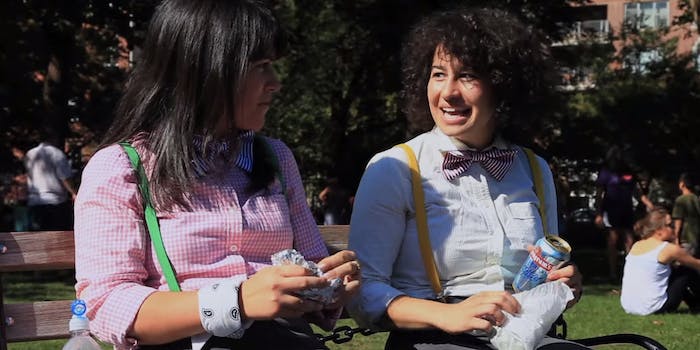 Back into Broad City.

If you watched Ilana Glazer and Abbi Jacobson’s hilarious Broad City last year on Comedy Central, you likely developed an instant addiction to the irreverent twosome. The series unabashedly examines the not-so-glamorous side of young life in New York City, and gleefully exalts the rewards of female friendship.

Season 1 took us on a delightfully wild ride and the second season already looks like it’s going to be a hoot. But waiting for our beloved duo to return can be downright painful. For fans of the show, Jan. 14 can’t get here fast enough. How to fill the void?

Comedy Central has released “Hack Into Broad City,” a series of mini webisodes, and you can also stream season 1 on Hulu and Amazon Prime. But you’re going to want more.

We recommend diving into the deep cuts. Before Broad City came to Comedy Central, it was a lovingly crafted webseries on YouTube. Seasons 1 and 2 can be found on Broad City’s YouTube page.

Not sure where to start? We’ve got you covered.

“Subway on a Sunday”

Ilana and Abbi stumble upon an old acquaintance on the subway platform, and a cringe-inducing catch-up follows. Shaun Diston is hilarious as the pushy acquaintance who sandwiches himself into the girls’ subway ride.

Yoga class in Park Slope makes the girls feel very welcome, until they realize their classmates have them pegged for lovers, and mothers. Comedian Sara Schaefer guest stars as a Brooklyn mom who can’t believe the two aren’t a couple.

The girls embark on two very different date nights. Abbi is coy and timid while Ilana is at her brazen, booty-shaking best. The scene where Ilana seduces Hannibal Buress (familiar to fans of the Comedy Central series as Lincoln) with a private dance, while he looks on and politely comments, “I really appreciate this,” is one of the funniest in Broad City history.

Ilana and Abbi put on a variety show in Washington Square Park, and it’s everything we love about them. Watch until the end for Abbi’s moving rendition of  the ’90s R&B hit “Don’t Take It Personal (Just One of Dem Days)” by Monica.

The twosome spend Valentine’s Day exploring NYC, and what better way to spend the day when you’re single than with your best gal pal? Everything feels pitch perfect, until Ilana leans in for a kiss. The episode is an adorable homage to friendship, with an appropriate sprinkling of the raunchy humor Broad City is famous for.

Ilana insists on spending the night in Abbi’s bed and some very trippy dreams ensue. Nightmare gives way to nightmare and the peek into Abbi’s subconscious is terrifyingly funny. The episode is bursting with the personalities and neuroses that make the show such a riot.

A super-sized episode following Ilana and Abbi on a mysterious race through the streets of NYC. Along the way, they encounter a handful of hilarious cameos by Kristen Schaal, Amy Poehler, and John Gemberling (better known to fans of the Comedy Central series as Abbi’s unbearable roommate, Bevers).