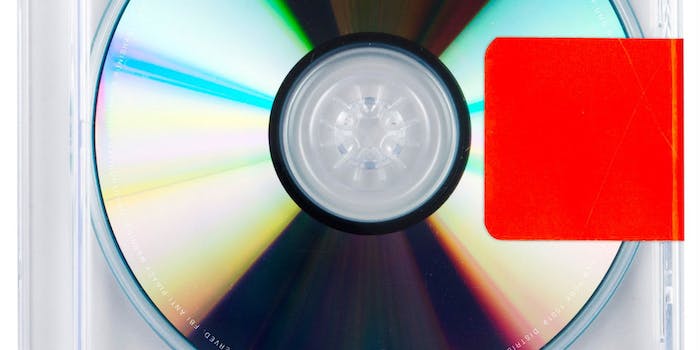 Trimmed to 450 songs, the mix spans hip-hop, indie rock and its sub-genres, metal, electronic, and country.

Every credible year-end music list will be topped by Yeezus. It’s not close: Chris Richards of the Washington Post wrote a defiant position paper against Arcade Fire’s self-serious double LP, Reflektor—thereby opening up a black hole of influential dissenters. This year we also lost Lou Reed, the surly king of New York City cool, and Reed really dug Yeezus. Kanye West may have gone too far with the late-breaking, absurd, you-can’t-be-serious video for “Bound 2,” but the critical press is united.

It helps that Yeezus is a modern masterpiece. The best parts are seconds-long asides: Kid Cudi’s dying breath repetition of the sentence, “If you love me so much then why’d you let me go?”; Charlie Wilson’s love in the club bridge; Justin Vernon’s filthy innuendo on “I’m in It.” It’s a recording designed to have songs bleed into one another. The kind of work where you go: “Wait, how is this already track nine?”

A 10-song, 40-minute ride, Yeezus might be the best album of the on-demand Spotify age.

When our Facebook-based pool of music nerds convened for last year’s 24-hour, 360-song, best of 2012 playlist, it took the collective think tank several days to reach 360. This year, we got to 500 tracks in one weekend. That’s a credit to Spotify, which makes it ridiculously easy to keep a running tab of music that you like. When it’s time to reference standouts, you just search up and down your list of playlists. Well-realized apps from taste-imposing entities like Pitchfork and Fader make it cake for users to skip reviews altogether, look at a rating, and decide for themselves if it’s any good.

Personally, 2013 was a rebuilding year. I moved from Washington, D.C. to Austin, Texas, and switched careers. It’s why Long Player 2013 originally began on a bit of a melancholy note, with emotive wizardry from Gold Panda and Mavis Staples. But then the thread told me to lighten up and make it a party. HAIM’s bulletproof “Falling” is now our Side A, Track 1.

We tried to stick to the rules: No more than three songs per artist, unless that artist is Drake and the guest features that he loves. Consensus favorites included A$AP Rocky, Parquet Courts, Arctic Monkeys, Unknown Mortal Orchestra, Washed Out, Sky Ferreira, Juicy J, and Rhye. Also like three dudes included Kurt Vile’s 10-minute shower timer, “Wakin’ On a Pretty Day.” No one fought for Robin Thicke.

Trimmed to 450 songs, the mix spans hip-hop, indie rock and its sub-genres, metal, electronic, and country, but it ends with the one album we’ll be coming back to for years to come: Yeezus.