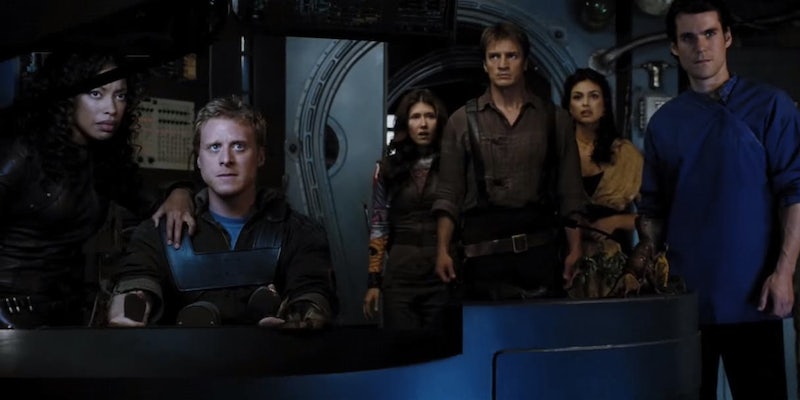 Move over, 'Entourage.' 'Star Trek' is just the beginning.

There are tons of TV shows that eventually find their way to the big screen, but more often than not, it’s in the form of a reboot or re-imagining—see 21 Jump Street, the excellent Addams Family movies, or the surreal Brady Bunch flicks, to name just a few.

A rarer bird is the cancelled or ended TV show that picks up where it left off, getting a sequel years after the original show left the airwaves. This weekend Entourage joins that club, with a feature film sequel following up on HBO’s bro fantasy that concluded its eight-season run back in 2011. Whether you give a rat’s ass about Vincent Chase and company or not, there are several other noteworthy instances of TV shows continuing as movies, and the release of the Entourage movie is the perfect excuse to revisit them—or check them out for the first time.

For the purposes of this list, we’re specifically focused on cases where a show was over and off the air, then resumed in movie form some years later. So we’re not including examples like The Simpsons Movie or South Park: Bigger, Longer, and Uncut, both of which released while the shows were still in full swing.

We’re going chronologically, but even if we weren’t, we’d pretty much have to start with Star Trek. Gene Roddenberry’s iconic sci-fi series set the bar for the whole “show returns as movies” thing, spawning a dozen feature films to date (with another due in 2016), not to mention five later TV spin-offs.

The eventual arrival of Star Trek: The Motion Picture a full decade after the cancellation of The Original Series was all the more impressive because there wasn’t much precedent for this sort of thing back then. And while The Motion Picture was derided as a ponderous dud by some critics at the time, it remained the highest-grossing movie of the franchise, adjusted for inflation, for decades. More importantly, it helped revive a cult franchise that would spend the next several decades conquering both the big and small screens.

Damn near the entire run of Star Trek is currently available on Netflix Instant, including the 1973 animated series, although several of the movies are inexplicably missing. The various TV incarnations are also available on both Hulu and Amazon Prime.

There’s unquestionably a good chunk of the Mission: Impossible movie audience who has no clue that the film franchise traces its roots back to a 1960s TV show… much less one with a cast that included the guy who played Spock.

Like the films that would follow, the original Mission: Impossible followed the exploits of the Impossible Missions Force, a top-secret team of government agents tasked with pulling off… well… impossible missions. The series ran for seven seasons on CBS and has been spoofed, riffed on, and referenced countless times in the decades since. It also returned for a brief TV revival in 1988, with actor Peter Graves reprising his role as legendary IMF agent Jim Phelps. When it came time to resurrect Mission: Impossible on the big screen, Brian De Palma’s feature film included the Phelps character as a tie to the franchise’s roots, with Jon Voight playing the veteran agent. Given that Phelps took a decidedly dark turn in the film, however, that throwback connection ultimately pissed off both the long-time fans and the original show’s surviving cast.

You can watch the full run of the Mission: Impossible TV series on Netflix Instant, as well as the first two films. Probably better just to pretend the second one doesn’t exist, though…

The Naked Gun is another latter-day franchise that was birthed as a show most people have never even heard of. Created by David Zucker, Jim Abrahams, and Jerry Zucker—the team behind Airplane! and Top Secret!—Police Squad was a painfully funny spoof of humorless law enforcement procedurals like Dragnet, and made brilliant use of Leslie Nielsen as an uncrackable straight man (his performance got considerably broader during the films).

Premiering in March 1982 on ABC, Police Squad! lasted only six episodes, during which Nielsen delivered such lines as “We’re sorry to bother you at such a time like this. We would have come earlier, but your husband wasn’t dead then.” The handy thing about Police Squad! being so obscure is that Abrahams and the Zuckers were able to recycle several of the gags when The Naked Gun films came around.

All three of the Naked Gun movies are available on Netflix Instant. As for Police Squad!, well, YouTube is your friend…

Mark Frost and David Lynch’s Twin Peaks was ahead of its time in many ways, unfolding the mystery of a single murder over the course of its first season… and then getting even nuttier in its insane second season. While it lost some of its narrative momentum after it revealed Laura Palmer’s killer at the end of season 1, the second season expanded its surreal paranormal mythology in ways that have kept fans guessing, speculating, and scratching their heads for over two decades.

A little over a year after Twin Peaks aired its maddening cliffhanger of a series finale, Lynch threw more fuel onto the fire in the form of Twin Peaks: Fire Walk With Me, a bizarre prequel/sequel hybrid film focused on the days leading up to Laura Palmer’s murder, and on the backstory of the terrifying killer and the other inhabitants of the Black Lodge. In typical Twin Peaks fashion, Fire Walk With Me is by turns funny, lurid, frightening, peculiar, fascinating, and confusing—just as it should be.

Both seasons of Twin Peaks are available on Netflix Instant and Hulu. Fire Walk With Me isn’t on any of the subscription streaming services, but you can purchase or rent it from Amazon or the like. Now’s the perfect time to marathon through the whole Twin Peaks experience to prepare for its impending return on Showtime.

Like Lost, Breaking Bad, or Game of Thrones that followed it, The X-Files is one of those rare TV shows that became a pervasive pop-culture phenomenon that everybody was watching and talking about. FBI agents Fox Mulder and Dana Scully actually first took to the big screen during the prime of the show’s original run, with the 1998 movie The X-Files: Fight the Future slotting in between the fifth and sixth seasons.

A second movie, 2008’s I Want to Believe, arrived some six years after the show wrapped up its run on Fox. Directed and cowritten by series creator Chris Carter, I Want to Believe picked up with Mulder and Scully retired from the FBI, called back into service for a mystery involving a missing agent and a formerly child-molesting priest who may or may not be having psychic visions sent by God. I Want to Believe left many fans wishing aliens would erase their memories of its existence, so hopefully the upcoming X-Files revival series will prove a better reunion for Mulder and Scully.

The X-Files’ full series run is available on Netflix Instant, Amazon Prime, and Hulu. If you’re interested in the movies, you’ll have to rent or purchase them, but we recommend just watching Fight the Future and pretending you never even heard about I Want to Believe.

In The Terminator, Sarah Connor remarks that, although she only had a few hours with Kyle Reese, they “loved a lifetime’s worth” in that time. Although Firefly only lasted a single season on Fox back in the day, the show’s fans have clearly loved it several lifetimes’ worth, ensuring that it’s still an inevitable inclusion on any “shows that need a resurrection/sequel” list worth its salt.

They loved it so much that in 2005, against all odds, their beloved crew of the Serenity returned in a big damn theatrical movie spin-off. For fans of the show, it was a blast, but it works much better when viewed as a concluding chapter of the series than it does as a standalone movie. It’s a bit too “inside baseball” for anyone trying to come into Serenity without having first seen Firefly, full of exposition and trying to conclude multiple storylines that would ideally have played out over many seasons. Still, Serenity did make for a satisfying—if emotionally brutal—wrap-up to one of the greatest science-fiction TV series of all time.

You can watch Firefly’s one and only season (Editor’s note: [sigh]) on Netflix Instant, Amazon Prime, and Hulu. Serenity is available for rental or purchase from services such as Amazon or Google Play.

Veronica Mars ran for three brilliant seasons on UPN/The CW, cementing its status as a cult classic thanks to a blend of hard-boiled detective flair and teen angst; a charismatic, complex performance from lead Kristen Bell; and wicked-sharp scripting from creator Rob Thomas and his team of writers. In a perfect world, it would have run for at least five seasons, but it remains a textbook example of how to do serialized storytelling right, especially in its near-perfect second season.

Still, once it was cancelled, it wasn’t the sort of show that seemed likely to stage a resurrection…certainly not a full decade down the line. Then again, few people saw the whole crowdfunding phenomenon coming. Spurred on by enthusiastic fans, the Veronica Mars movie project became a ridiculous success on Kickstarter, raising over $5.7 million from some 90,000 donors. The show proved again and again that you couldn’t keep Veronica Mars down, and the unlikely feature film spin-off just further proved the point, premiering at the South by Southwest Film Festival in March 2014 and earning largely positive reviews from critics.

If you’ve never seen Veronica Mars, cancel your plans and go binge all three seasons on Amazon Prime, stat. The movie is available for rental or purchase from Amazon, Google Play, and other digital services.