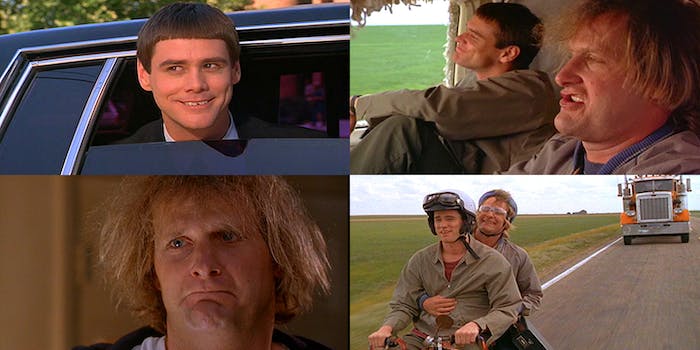 20 of the best moments from the original ‘Dumb and Dumber’

Who cares about the sequel when you can always go back to the original?

This Friday, Dumb and Dumber To opens in theaters nationwide, with Jim Carrey and Jeff Daniels reprising their original roles as, respectively, Lloyd Christmas and Harry Dunne. Not only was the 1994 film a tentpole for Carrey (fresh off of box office success from Ace Ventura: Pet Detective and The Mask), but it launched the career for the Farrelly Brothers, who went on to produce other comedic greatness like Kingpin, Shallow Hal, and, of course, There’s Something About Mary.

While reaction to the Dumb and Dumber To trailers has been mixed, nothing can take away the dimwitted, raunchy charm of the first Dumb and Dumber, whose gags ironically reeked of brilliance. To commemorate the two decades of time that have elapsed between the movies, we compiled 20 of the best scenes from the original for you to enjoy once again.

“I drove her to the airport. Sparks flew. Emotions ran high. She actually talked to me, man.”

“Senior citizens, although slow and dangerous behind the wheel, can still serve a purpose.”

“It feels like you’re running at an incredible rate!”

“You sold my dead bird to a blind kid?”

“Wanna hear the most annoying sound in the world?”

“Do you want an atomic pepper, Mr. Mentilino?”

“Just when I think you couldn’t possibly be any dumber, you go do something like this…and totally redeem yourself!”

“Come on, Cinderella, we have to get you ready for the ball!”

“It’ll only hurt for a moment, like a Band-Aid.”

“We’ve landed on the moon!”

“One half teaspoon…for fast effective relief.”

“So you’re telling me there’s a chance…”

“Two lucky guys are going to be traveling around with those girls for the next couple of months.”