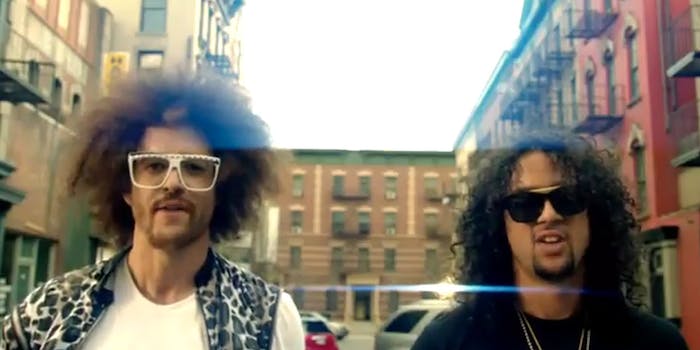 Now that’s what I call a mashup!

Like Spotify on steroids, these mashups will bring you up to speed on the year in music in under an hour.

Creating a mashup of pop hits is an art form that few do well (see Girl Talk). You need a skilled ear to pair the right pulsating beats with verses that compliment instead of contradict. And you haveto make it look easy at the same time.

DJ Earworm just released his annual United State of Pop yesterday, but he’s not the only one to master this audio Gestalt effect.

Here are the Daily Dot’s favorite pop mashups from 2011.

The German DJ, who goes by the name Ben Stiller, created this foot-tapping mix in early December and has more than  2 million views on YouTube. Similar to DJ Earworm, he mixes in Top 40 songs that you are familiar with (like Maroon 5’s “Moves Like Jagger”) but with some left-field selections, like Sak Noel’s “Loca People.” Check out the custom-made music video, too.

Fifty songs in six minutes is a feat that few could successfully accomplish, but Daniel Kim managed to pull it off. The Canadian DJ digs deeper with pop hits and samples songs that the others left out, like Beyonce’s “Run the World (Girls)” and Black Eyed Peas’ “Just Can’t Get Enough,” among others.

If you’re looking for more of a British flare for your mashup, try this one. The three-minute song features 42 samples that were No. 1 on the charts in the United Kingdom at some point in 2011. Similar to its US counterparts, LMFAO and Rihanna are featured heavily, but British singers Cher Lloyd and Olly Murs make appearances.

Pop Medley 2011 (Sam Tsui & Kurt Schneider)
If a Glee-like anthem is more of your thing, you’ll dig this mashup. Sung by two friends, the pair’s acapella take of the 2011’s chart toppers is worth a listen. The song blends Katy Perry’s “Last Friday Night” and Usher’s “DJ Got Us Falling in Love Again,” without totally being annoying, so props! Unfortunately, the YouTube video was made private, but we found this copy.