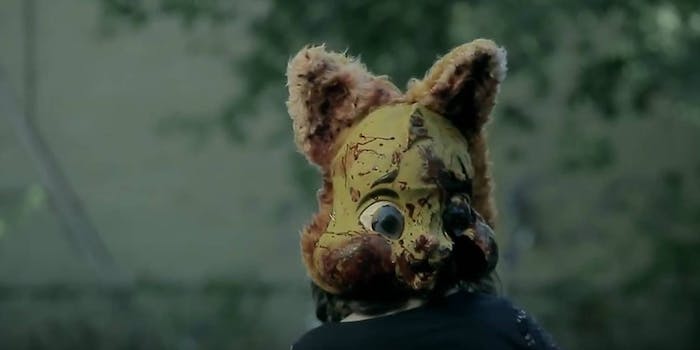 No matter the season, these will give you goosebumps.

With the summer heat encroaching, we’re still a long way from the crisp fall evening of an ideal Halloween. But why not beat the heat with drawn curtains, fresh popcorn, and a chill in the air courtesy of a cranked-up A/C?

As far as we’re concerned, there’s no bad time to binge-watch creepy shit, so we at the Daily Dot have dug into the streaming catalogs of Netflix, Amazon, and Hulu to find a baker’s half-dozen of shows filled with monsters—both supernatural and all too human. Turn down the lights, put the kids to bed early, and… wait, is that someone at the door?

Created by Shaun Cassidy and executive produced by Sam Raimi, American Gothic is set in the fictional South Carolina town of Trinity. It’s a marvelous place to live … so long as you don’t cross Sheriff Lucas Buck (Gary Cole), a charismatic bastard who may actually be the devil himself. When he’s not manipulating people into doing terrible things, Buck spends his time trying to groom his would-be heir, young Caleb Temple (Lucas Black), who is gifted with his own mysterious powers. Thankfully, Caleb has a better angel guiding him in the form of his dead sister Merlyn (Sarah Paulson), who does her best to steer Caleb away from Lucas’s dark path. (Note: the show’s original broadcast suffered from CBS airing it in a backassward and confusing order, so do yourself a favor and watch it in the producer’s preferred viewing order. And keep an eye out for the Bruce Campbell episode.)

The original Dark Shadows was a truly peculiar footnote in TV history. A daytime soap opera focused as much on ghosts, ghouls, and vampires as the usual backstabbing and infidelity, the show ran from 1966-1971 on ABC. In 1991, the original series’ creator, Dan Curtis, spearheaded a Dark Shadows revival for NBC, starring Ben Cross as the 200-year-old vampire Barnabas Collins and Joanna Going as the beautiful Victoria Winters. Victoria comes to the Collinwood estate to work as a governess only to discover a connection to the family’s past she never could have anticipated. Poor ratings cut the series short at only 12 episodes, but it has a cult following to this day. Cross and Going are great, and there’s plenty to love for fans of gothic romance with a supernatural twist.

As prevalent as vampires have been in our pop culture, you might think you’ve seen every vampire show and movie that’s out there—but I’ll bet most of you missed this one. This one-season 1998 series focuses on a team of covert vamp-hunters working jointly for the British government and the Vatican. Police Detective Michael Colefield (Jack Davenport, best known for the Pirates of the Caribbean series) discovers this secret war against the nosferatu while trying to track down his missing best friend Jack (Stephen Moyer, a decade before True Blood). The vamps have a plan in the world of Ultraviolet, and they’re engaged in all sorts of under-the-radar medical experimentation, so it’s up to Colefield and his team to figure out just what the hell they want. Are we purely food to them, or just an irritant to be disposed of? (The cast also includes the talented Idris Elba.)

This underrated 2009 CBS miniseries is a little bit slasher flick, a little bit Agatha Christie’s And Then There Were None. The titular island was the location where a man named John Wakefield killed several people seven years earlier, but now it’s due to play host to a far happier event: a wedding. Friends gather from around the country to wish Henry and Trish well, even though it’s kind of a dick move to have your nuptials in the same place where your friend Abby’s mom was killed by a psychopath. Soon enough that bad mojo begins paying off, with wedding guests dropping like flies and the (so-far) survivors whispering that maybe crazy old John Wakefield isn’t quite as dead as everyone thought. It’s a race against time to solve the mystery while there’s somebody still around to solve it.

Created by two of the guys behind the Paranormal Activity franchise, ABC’s one-season wonder The River is a found-footage horror tale about the search for a famous explorer named Dr. Emmet Cole (Bruce Greenwood), who has vanished somewhere in the Amazon jungle on a search for “real magic.” Six months after his disappearance, his emergency beacon begins transmitting. His wife (Leslie Hope) recruits their son (Joe Anderson) for the hunt, and together they join a film crew and an opportunistic producer (Paul Blackthorne) to travel deep into the wilderness in search of the missing man. The good news is he’s left a trail behind him; the bad news is that trail will take them into a heart of darkness unlike anything they’ve ever seen before, forcing them to question everything they believed to be true … assuming they can survive it.

This Canadian horror anthology was adapted from a Japanese series, and the first episode was helmed by Vincenzo Natali (Cube, Splice). Each episode tells a series of interconnected stories, all linked—at least tangentially—by the website from which the show takes its name: an unsavory online portal where people can post snuff videos and ask for advice about how to dispose of a corpse. As is typical of anthology shows, some segments work far better than others, but the first episode in particular is a clever and twisty affair that loops back around on itself and connects in ways you wouldn’t expect. Morbid, creepy, and often packed with gallows humor, Darknet will leave you suspicious of everyone you meet. What more could you ask for from a show like this? (Except maybe a second season.)

Another Canadian offering, Slasher is designed as a seasonal anthology like FX’s American Horror Story, with each year unfolding a new ongoing storyline. For its freshman year, Slasher follows a small town being terrorized by a killer going by “the Executioner.” It’s a grab bag of horror tropes: The protagonist (Katie McGrath) whose past is defined by an infamous act of violence, her return to the place where it all happened after many years away, and the inevitable outbreak of copycat murders that echo the past she’d hoped to forget. Slasher also borrows a page from David Fincher’s Seven, with the Executioner punishing his victims for their engaging in the Seven Deadly Sins. It definitely doesn’t reinvent the wheel—nor does it try to—but it attaches that wheel to a comfy bike and takes you on a thoroughly fun ride.